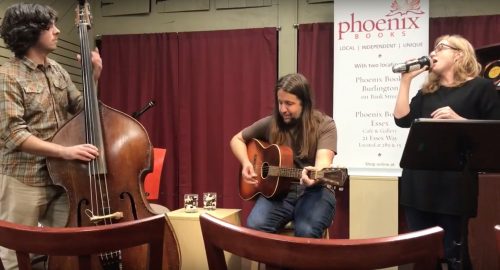 Swale kicked things off with a tender trio take on “Unchained Melody,” the Righteous Brothers hit first recorded as the theme for the now-forgotten 1955 prison move Unchained. Bobby Hatfield left a pretty high bar for a vocalist to hit, but Swale’s Amanda Gustafson easily cleared it while Eric Olsen (guitar) and Tyler Bolles (bass) gave her a stripped-down acoustic backing.

Then Mark Daly, frontman of Madaila and former frontman of Chamberlin (who also did some killer covers in their day), did solo versions of two very different songs: “I Heard It Through the Grapevine” and “Gin and Juice.” In the book, I focus particularly on the Creedence Clearwater Revival and Gourds versions, respectively, but Mark’s covers were all his own. “Gin and Juice” was certainly the evening’s comedic high point, and added a local Vermont touch too: much of the story in the book is how the Gourds’ biggest hit went viral on Napster under another band’s name…Phish.

Thanks to the artists for participating, and to Brent Hallenbeck of the Burlington Free-Press for moderating the discussion. And if you know of a bookstore or music venue near you that might want to host a similar event, drop me a line: ray@covermesongs.com.

[Update November 8: Watch a long video of the full thing, including my conversations with Brent]

Check out more Swale at their website and Madaila at theirs. Also, don’t miss Swale’s cover of Sinéad O’Connor’s “Black Boys on Mopeds” and Madaila’s of David Bowie’s “Starman.”