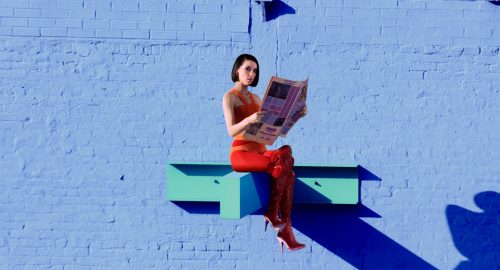 Few would label St. Vincent’s eclectic brand of music as anything resembling country or western. No matter, she still channeled the ghosts of country music’s past with a stunning performance of Patsy Cline’s “Crazy” during a recent appearance on the British music showcase Later… With Jools Holland.

On the show, St. Vincent (aka Annie Clark) told Holland that growing up in Texas she listened to a lot of country music by artists such as Cline and George Strait. One can actually hear elements of this on her new album Masseduction. Stuck between her hard-pulsing electro pop, there’s a melancholy track, “Happy Birthday, Johnny,” containing a pedal-steel guitar interlude that sounds as if it could have been on one of Strait’s albums in the ‘80s.

Written by none other than Willie Nelson, “Crazy” was first recorded by Cline in 1961. Nelson himself released a version in 1962. The song has been covered by a laundry-list of singers over the years, spanning a number of different genres. Even the artist known as Mr. Russia contributed a version for the Cover Me Turns Ten album released last week.

St. Vincent gave the song a quiet, haunting ‘50s jazz spin, almost as if she were evoking Billie Holiday as opposed to Cline. Given that she performed the song wearing full-body leopard skin spandex, St. Vincent might not receive an invitation to join the Grand Ole Opry anytime soon. Still, one hopes she will incorporate more of these Texas influences into her repertoire going forward and give today’s current crop of country bros a lesson in roots.

The video has been removed from YouTube, but you can still watch it over at Consequence of Sound.

One Response to “St. Vincent Gives Texas-Sized Tribute To Patsy Cline with “Crazy””