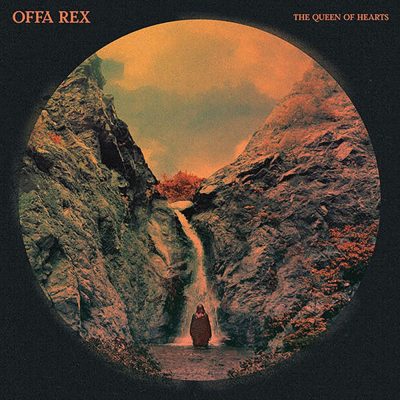 If you are a regular reader of this site, you may remember this post from a couple months back, about the (to my ears) hotly anticipated shared project between English folkstrel Olivia Chaney and Portland quirkmeisters the Decemberists. Well, the lovely people at Nonesuch have now released Offa Rex’s The Queen of Hearts, and mighty fine it is too.

Chaney may not be especially well known to many, unless you were lucky enough to catch the last round of occasional Joe Boyd-curated Nick Drake tribute shows, featuring a host of singers and musicians from varied sources. Chaney was undoubtedly one of the stars of the one I saw, alongside company like Glen Hansard and Sam “Iron and Wine” Beam. This led me to her 2015 release, The Longest River, which I can commend. The Decemberists are much better known and have long been drawn to the canon of trad.arr., especially singer Colin Meloy. Indeed, one might surmise the seeds for Offa Rex were sown by a tour-only EP Meloy produced in 2006, Colin Meloy Sings Shirley Collins. Indeed, Meloy says he invited Chaney to the table by suggesting in a tweet that his band be her Albion Country Band. Queen of Hearts shows them not making a half-bad shot of it, with side-orders aplenty of Fairport Convention and Steeleye Span, not to mention a little of fellow U.S. travelers 10,000 Maniacs on the keyboard swirl of “Bonnie May.”

I would love to suggest this is a set of maverick revisioning, transporting these largely ancient songs into the 21st century. I can’t, but don’t let that put you off. This is a gloriously faithful evocation of that period in the late 1960s when psychedelia was meeting folk music for the first time and making merry, bringing the best of both styles together with a freshness sometimes lacking from the lumpen later cliche of folk rock. This is no fiddle-de-dee with rock drums, although there is fiddle, occasionally, and there are drums, John Moen channeling the great Dave Mattacks with precision.

Most of the songs here are very well-known, which sometimes works against the band. A good example of that is “First Time Ever I Saw Your Face,” as Chaney tries to restore the original folk song of Ewan McColl away from the tropes of the smoother Roberta Flackisms often so prevalent in covers of this fine song. On further listens, I think she cracks it. Other highlights are an astonishing “Willie O’Winsbury,” the harpsichord-led title track, and the majestic “The Gardener,” a song that has me minded of “Crazy Man Michael” in mood if not content. There is a brief morris dancing instrumental medley; having myself started indulging again in this tradition, it’s right up my street. Time enough to go for a pee if not your taste.

Down sides? I know many find Meloy’s singing the Achilles heel of the Decemberists, preventing much love for them. He does sing here, mainly a bit of backing, but takes lead on two songs, the rousing standard “Blackleg Miner” being one. His twang sounds initially out of place but just about squeezes in on each subsequent listen – but then, I like his voice. Elsewhere, I remain uncertain about the Black Sabbathy intro to “Sheepcrook and Black Dog,” but with its tapped drums, oboe, and leslied guitar, it swiftly morphs into the most Shirley Collins/Albion Country Band facsimile on the disc, and would not be out of place on that band’s No Roses.

The production and sound of this recording, by Neko Case producer Tucker Martine, is crystal clear, the strong contributions of each musician clearly discernible in the wide open mix. Offa Rex’s multi-instrumentalism is exploited to the fore, with occasional bursts of accordions, mandolins and the varied keyboards provided by both Chaney and Jenny Conlee. A special mention for the exemplary double bass of Nate Query on “Willie O’Winsbury,” a track I still can’t stop playing, and it would be churlish not to mention the guitars, dobro, etc. of Chris Funk, early Richard Thompson the clear influence.

A few words about Chaney’s voice: perfect for the material, sweet and pure with enough character and clarity to give her an identity of her own. Yes, of course there are hints of Sandy Denny and Maddy Pryor, as well as the aforementioned Collins – unavoidable with this material, really – but no copyist she.

Cripes, do I hope Off Rex bring the live show over to the U.K.? With the 50th anniversary of Fairport at their yearly Cropredy festival pending, how good would that be? On second thoughts not, they would blow the headliners off stage. Colin, are you reading this? Come over, come over!!

You can find Offa Rex’s Queen of Hearts on Amazon.

2 Responses to “Review: The Queen of Hearts by Offa Rex”