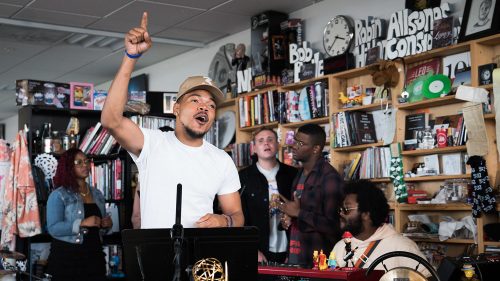 The last time we heard from Chance the Rapper, he was doing a weird and wonderful cover of Ziggy Marley’s Arthur theme song. So wonderful, in fact, that we named it our our favorite cover of that entire year. So needless to say, we were excited to see his new NPR Tiny Desk Concert featured another cover, of Stevie Wonder’s “They Won’t Go When I Go.”

“They Won’t Go When I Go” is a relative deep cut on Wonder’s 1974 masterpiece Fulfillingness’ First Finale, though more first heard it via George Michael’s popular cover. It’s no surprise Chance would know the original though: on The View earlier this year, he called Wonder “the greatest living artist.” Plus in that same interview, Chance said he considered Kanye West an inspiration, and Kanye himself covered this same song live way back in 2011.

“This if for somebody close to me that just lost somebody close to them,” he says by way of introduction. With his band the Social Experiment backing him on keyboards, horns, drums, and gorgeous vocal harmonies, it’s a stunning performance that mixes Chance’s gospel influences with soul and hip-hop.

Watch Chance the Rapper’s cover of “They Won’t Go When I Go” below. It starts about nine minutes in.