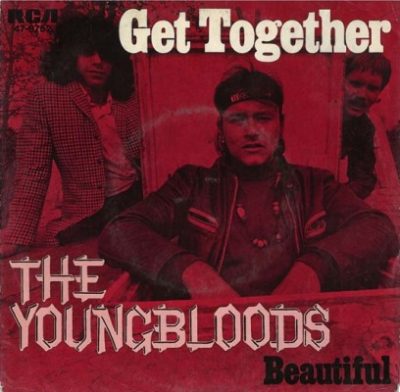 But despite its pervasiveness, there are at least three things that most people don’t know about the song. First, and the reason why we are writing about it here, is that the Youngbloods’ version is a cover–as we will see, it was at least the fourth relatively-high-profile version of the song recorded. Second, it was written by Chet Powers, best known under one of his aliases, Dino Valenti (or Valente), as the lead singer of Quicksilver Messenger Service. Third, the song was not a success upon its initial release, and only gained popularity after it was used in a radio PSA.

Let’s start with the songwriter, Chet Powers.  Powers is another of the colorful characters from a period which was filled with colorful characters. According to his sister, Powers was born and raised on the carnival circuit, where he learned the essential skills of lying, cheating, and showmanship, not to mention ukulele and guitar. A brief stint in the Air Force ended with a psychiatric evaluation that read, in part: “Chester Powers is capable of doing anything he sets his mind to, however, he thinks that the whole United States Air Force should conform to his way of thinking.”

He began playing in coffeehouses and folk clubs in New England and Greenwich Village before deciding to head out to Los Angeles, where, in the early 1960s, he wrote and performed “Let’s Get Together.” Here‘s an unreleased version of Powers singing the song in classic coffeehouse style. Moving to San Francisco, Powers began playing with a group of musicians that would later become Quicksilver Messenger Service, but before the band got going, Powers was arrested for marijuana possession and spent two years in Folsom Prison. To raise money for his legal fees, Powers sold the publishing rights to “Let’s Get Together” to Frank Werber, the manager of the Kingston Trio.

After leaving prison, Powers, as Dino Valenti, rejoined Quicksilver as lead singer and main songwriter, and went on to compose the band’s biggest hit, “Fresh Air” (under another alias, Jesse Oris Farrow). He continued to record and tour with various versions of the band until he died in 1994.

Meanwhile, the Kingston Trio released the first version of “Get Together” on their mildly successful 1964 album Back In Town. This version, retitled “Let’s Get Together,” is perfectly fine, but sounds pretty much like every other Kingston Trio song, which is why most of us have never heard it before.

Later in 1964, folksinger Hamilton Camp released an earnest, stripped-down version not unlike Powers’ recording, on his Paths of Victory album, but it made little impact. Also from 1964, here‘s an unreleased, slick demo version of the song by pre-Byrds David Crosby (a friend of Powers), featuring members of the famed Wrecking Crew.

The first charting single version of “Get Together” was released the following year by We Five, another folk band managed by Werber, that was started by Michael Stewart, brother of Kingston Trio member John Stewart. It hit 31 on the Billboard chart. As you can hear, this version moves a bit from the somewhat backwards-looking folk revival style of the Kingston Trio and more toward a more contemporary sound that would soon be made popular by bands like the Mamas & the Papas, Jefferson Airplane, and Fairport Convention.

The lead singer of We Five during this period was Beverly Bivens, who appears to have mostly disappeared from memory, despite having a beautiful, powerful voice that clearly influenced female singers of the ’60s. Bivens, though, left the band to get married (to bassist Fred Marshall, of the Vince Guaraldi Trio, who appeared on the A Charlie Brown Christmas album), work on more experimental projects, and have a family. She was essentially out of the music business by the mid-1960s, which is sad, because if she had stuck around, she probably would be considered an equal to Mama Cass or Grace Slick.

Speaking of the Jefferson Airplane, there is much unsubstantiated chatter on the Internet alleging that Bivens was an influence on the Airplane’s first female singer, Signe Toly Anderson, and you can certainly hear it in their voices (and, maybe, in the fact that Anderson also walked away from the music business for family and other reasons). The band’s take on “Get Together” — a harder edged version, due in large part to Jorma Kaukonen’s electric guitar — appears on the Airplane’s 1966 debut album, Jefferson Airplane Takes Off. Anderson mostly takes a backseat to Marty Balin and Paul Kantner, but she does get to sing lead on one verse. It is an excellent version of the song, and was well reviewed at the time, although it was never released as a single, again leading to it being mostly forgotten. For those of us imprinted with the Youngbloods’ version, there are some jarring rhythmic choices, but objectively, this version contains some interesting edges that the later version sanded off.

In 1967, the Youngbloods, a band fronted by Jesse Colin Young, released their version, with the simpler title, “Get Together,” on their self-titled debut album. Released as a single, it peaked at 62 on the Billboard Hot 100 chart and seemed destined for obscurity. But in 1969, its simple message and catchy, laid-back sound was used in a public service announcement for unity from the National Conference of Christians and Jews.  The single was re-released (as was the album, under the name Get Together), and it hit #5 on the Billboard charts, starting its march toward becoming a cultural touchstone.

Did the Youngbloods’ defining version mark the end of the song’s coverage? Far, far from it. Another interesting version released in 1967, by Chicago band H.P. Lovecraft, ramps up the psychedelia, and has also mostly been forgotten, although it is pretty good, and certainly of its time. A version of the song was performed by Richie Havens (a friend of Chet Powers from his Greenwich Village days) at Woodstock; shortly after, it was performed at the Celebration at Big Sur by Joni Mitchell, with David Crosby, Steven Stills, Graham Nash and John Sebastian, in what appears to be an impromptu version.

From the late ’60s to now, the song’s popularity has flourished. It has been covered many, many times, by artists as diverse as Andy Williams, The Dave Clark Five, Della Reese, Big Mountain, and the Indigo Girls, and it even makes a cameo appearance at the beginning of Nirvana’s “Territorial Pissings.” That’s in addition to the Youngbloods’ version being repackaged in soundtracks ranging from Forrest Gump to Fear & Loathing in Las Vegas.

The song’s message of community and optimism lends itself to political activism, so let’s end this with a version by Jesse Colin Young from the No Nukes concert at Battery Park in 1979 with help from, among others, John Hall, Jackson Browne, Carly Simon, Graham Nash, Stephen Stills, and Bonnie Raitt.

“Let’s Get Together”/”Get Together” is available from Amazon in versions by The Kingston Trio, We Five, Jefferson Airplane and The Youngbloods.  And many, many others.