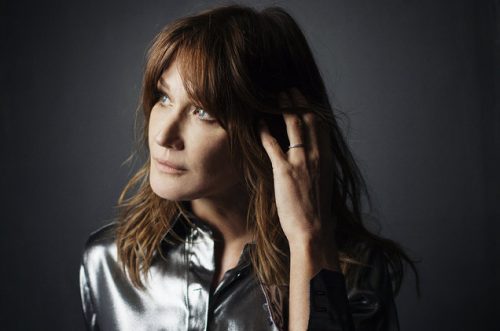 Carla Bruni, the former model, actress, and first lady of France, has released a beautiful rendition of Depeche Mode’s oft-covered “Enjoy the Silence” as the first single off her upcoming English-language covers album, French Touch (out in October).

The song remains one of the legendary British band’s most recognized and beloved contributions to the beautiful soundscape they have created in the four decades they have been active. There have been tons of covers of “Enjoy The Silence” since its release in 1990, but Bruni’s version is sure to be independently admired, as she has treated this piece like an original, stripping it down to a very intimate level.

“Feelings are intense and words are [not exactly] trivial” with Bruni’s signature raspy, breathy, lilting voice. She deconstructs chords into arpeggios while slowing the 56 BPM original to 51 BPMs. Bruni’s guitar, the backing strings section, and piano actually culminate to very short moments of silence not found on the original track.

Listen to the beautiful rendition in the brand new video below: