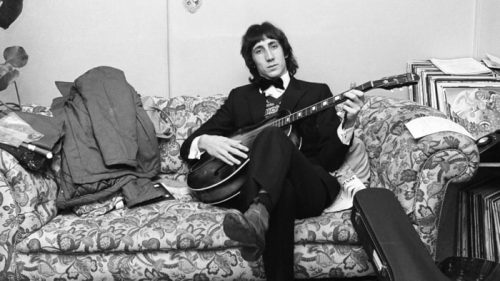 The man’s been stuck hearing “Hope I die before I get old” jests for a good half-century now, so we’ll just wish Pete Townshend a happy 72nd birthday and leave it at that. Except to add that he’s written some of the best songs played on classic-rock radio, as well as some of the best that classic-rock radio doesn’t play. Townshend’s writing gift has always been the ability to express achingly personal sentiments in a way that speaks for millions, from youth well into middle age, and the musical world is all the richer for his sharing it.

To celebrate, we’ve dipped our cup into the river of Who/Townshend covers and brought up these five. Join us in a toast and drink deeply.

The Jam – Disguises (The Who cover)

The Who’s version of “Disguises,” a lyrically intriguing song about mistaken identity, sounds a little like it was recorded next to a quarry mine. The Jam’s cover cleans up the sound, and that gives the song a directness that adds considerable punch. It’ll make you wonder why the original isn’t better known.

Oasis – My Generation (The Who cover)

“My Generation” could be called the definitive song about what it means to be a teenager. The Who’s version will forever be the ultimate one, and an artist has to have considerable self-confidence to tackle it. Well, self-confidence has never been anything that Oasis lacked, and their take is as brash as you’d expect, which serves the song perfectly.

Camel – Pinball Wizard (The Who cover)

“This is awful, the most clumsy piece of writing I’ve ever done.” Pete Townshend’s thoughts on “Pinball Wizard” make a lot of musicians wish they could be such klutzes. This gem of a cover comes from Camel – not the English prog rock band of the ’70s, but a band of Brits living in Italy, also known as Sopworth (sic) Camel, who used it as the leadoff track on their 1969 album Under Age.

Townshend was miserable during the recording of The Who By Numbers, the band’s 1975 album. Turning 30, burned out on the rock ‘n’ roll of his youth, he managed to come up with some of the most personal songs in the Who’s catalog. One of those was “Blue Red & Grey,” where he claims to love every minute of the day in a way that saddens yet is also believable. The song inspired Pearl Jam’s “Soon Forget,” which Eddie Vedder duly notes before this live performance. He doesn’t quite have all the lyrics down, but the feeling sure does come across.

“Let My Love Open the Door,” from 1980’s Empty Glass, is the most covered of Pete Townshend’s solo work, and with good reason – its statement is direct, understandable, and relatable. The original has cropped up in a lot of movies, usually about a lost soul who’s ready to have his world changed by a woman (Look Who’s Talking, Gross Pointe Blank, Vanilla Sky, Mr. Deeds, Jersey Girl, Along Came Polly, Evan Almighty, Dan in Real Life – and that’s not even counting the trailers it’s scored). Aaron Sorkin put a little spin on the song’s use, closing season two of The Newsroom not with the original, but with a cover by Luminate that makes the song feel bigger. What it loses in intimacy (which, remarkably, isn’t much), it gains in potency, doubling down on the song’s hopeful romanticism.

Pete Townshend’s memoir Who I Am is available on Amazon.

One Response to “They Say It’s Your Birthday: Pete Townshend”