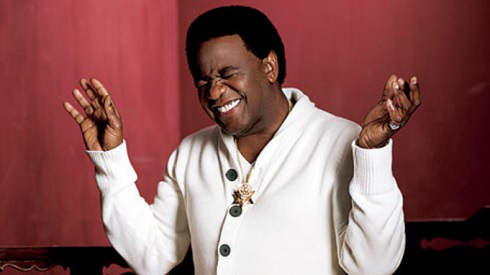 A belated happy birthday to the Reverend Al Green, who turned 71 years old yesterday. The soul giant teamed with producer Willie Mitchell on the Hi Records label to create some of the most memorable singles and albums of the early ’70s, then moved away from secular music into gospel and preaching – his Full Gospel Tabernacle Church in Memphis recently celebrated the 40th anniversary of its founding. His original songs have been covered by people up to and including the president of the United States, but today we’ll look at the holy spirit that he brought to the songs of others.

Some of Green’s best work has been on cover songs. He slowed down the Temptations’ “I Can’t Get Next To You” and recorded a vocal that pauses and rushes, over and over, building up the tension until he hits an unbelievable note at the end, and after he covered “How Can You Mend a Broken Heart,” the Bee Gees changed their live performance of it to reflect Green’s arrangement. Those two songs became hits, but his lesser-known covers can shine just as brightly, as we’ll soon see.

1969’s Green Is Blues was Green’s first album with Mitchell, and it found both men getting a grip on what they were capable of. One result: Green’s cover of “The Letter,” which a teenaged Alex Chilton had brought to the world a couple years earlier and which had not yet been owned by Joe Cocker. Green opts away from the gritty soul both those singers brought, giving us slow, smooth, and so so sweet.

By 1972’s I’m Still In Love With You, Green and Mitchell had found the sophisticated funk sound that became the hallmark of Hi Records. It’s shown to good effect in Green’s cover of “(Oh) Pretty Woman”; the smooth groove, the sweet strings, the steady 4/4 beat, the touches of organ, with Green gliding through it all on a current of love. Unlike Roy Orbison’s version, the pretty woman doesn’t walk away before turning back; Green hooked her (and us) right from the start.

We’re avowed fans of the Righteous Brothers’ take on “Unchained Melody” here at Cover Me – our own Mike Misch has written about it once or twice – but we’re always open for another good take on it. That’s what Green’s is; he may not fling the final verse into the stratosphere the way Bobby Hatfield did, but that’s because he’s already floating in the clouds.

When the Rock & Roll Hall of Fame finally had its grand opening in 1995, the celebration included an all-star concert in Cleveland Stadium. One of those stars was Al Green, who sent chills up everyone’s spines with his thrilling version of Sam Cooke’s “A Change Is Gonna Come.” It’s not easy to transfix sixty thousand people with a ballad, but Green sure made it look that way.

Al Green – You Are So Beautiful (Billy Preston cover)

Green’s 2005 album Everything’s OK proved that he hadn’t lost anything in the thirty-odd years since his biggest success. “This is an album of old pros doing what they do best,” said PopMatters’ David Marchese, “and the ballads give them the best setting to do it in.” Among those ballads was the album’s sole cover, “You Are So Beautiful,” which wiped away every hint of schmaltz (no mean feat) and left only a deeply inherent sincerity.

The Gospel According to Al Green, a 1984 documentary, is available on YouTube and Amazon. Also on Amazon: the required Greatest Hits.

One Response to “In the Spotlight: Al Green”