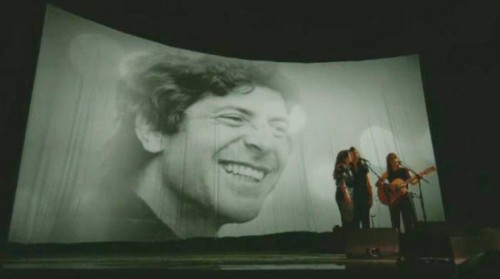 It’s hard to keep up. At Canada’s Juno Music Awards this week, Feist performed a beautiful trio cover of “Hey, That’s No Way to Say Goodbye” – though releasing one of his best-ever albums right before his death actually is a pretty good way to say goodbye. Watch the clip below, introduced by Canadian Prime Minister Justin Trudeau (Cohen was a pallbearer at Trudeau’s father’s funeral).

One his new EP Night Talks, Sun Kil Moon covers “Famous Blue Raincoat” live on the piano. Hot on the heels of his mammoth and sprawling double album Common as Light and Love Are Red Valleys of Blood, Mark Kozelek pares his music back again with it’s a small and quiet cover.

On a recent episode of The Strombo Show, Hamilton Leithauser of The Walkmen covered “Came So Far for Beauty” (a worthy follow-up to his Walkmen bandmate and cousin Walter Martin playing many Cohen songs in the house band at a recent tribute concert). His solo acoustic cover sounds much like how Leonard himself would do it, though with slightly more “gift of a golden voice.”

Finally, at a recent tribute concert in Sweden, First Aid Kit covered a whole bunch of Cohen songs. Watch videos of “Suzanne,” “Everybody Knows,” “Who By Fire,” “If It Be Your Will,” and “So Long, Marianne” below. The show was supposedly filmed for Swedish TV, so hopefully we’ll see better quality videos soon. “Suzanne” in particularly is breathtaking, despite the shaky video quality.