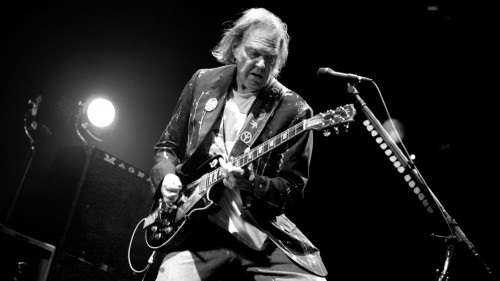 Neil Young recently cancelled his Pearl Jam Rock and Roll Hall of Fame induction speech due to illness (he’s reportedly fine now). While he takes a break though, new Neil covers keep rolling in. Two particularly great ones have surfaced in the last month, tacking a pair of Young’s loudest and most fiery songs.

First up, composer Teho Teardo and singer Blixa Bargeld (of Einstürzende Neubauten/Nick Cave and the Bad Seeds fame) cover “Hey Hey, My My” on their new EP together Fall. A weird and wonderful production, it brings together bass clarinet, musical saw, and a six-piece string section under Bargeld’s mesmerizing line readings. It’s one of the best Neil covers we’ve heard in recent years, surprising and unexpected.

Then we’ve got Screaming Females, being true to their name in a recent live cover of “Fuckin’ Up” with tourmates Wild Rice. This is hardly the first time they’ve covered Neil, and they typically go for the wild solo-fests (check out the “Cortez the Killer” we posted back in 2012). Frontwoman Marissa Paternoster is one of the best young guitarists around, very much in the Neil mode of pushing solos to the limit and not being overly concerned with technical precision, so the sprawling “Fuckin’ Up” a perfect fit. It’s a far cry from their A.V. Undercover covers of Sheryl Crow and Taylor Swift, which we’ve got below too.