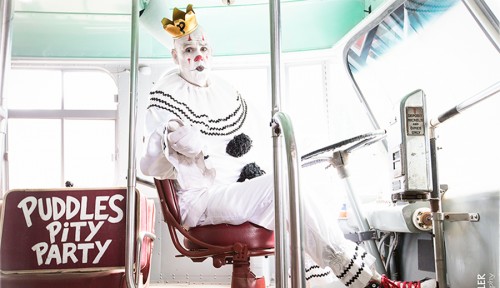 Cheap Trick’s “I Want You to Want Me” has traveled a varied path, covered by Letters to Cleo, Dwight Yoakam, and Chris Isaak, to name a few notables. This stripped-down version, however, is a far cry from the many incarnations of the song – starting with the fact that it is sung by a clown.

Throughout its cover evolution, “I Want You to Want Me” has stayed decidedly upbeat, with full bands, peppy harmonies, and an overall pop feel. Consider for a moment, however, the lyrics to the song:

Which begs the question: why is this an upbeat pop song in the first place? It sounds more like a lover’s lament, which is exactly what Puddles Pity Party finds in his version. The tempo is slowed down to a rate where you can really let those lyrics sink into your bones. His voice oozes over the notes with a clear, affecting tone. A guitar is the sole accompaniment.

Puddles’ musical career took off in 2013 when his cover of Lorde’s hit song “Royals” went viral. From there, he has performed all over the world, putting his melancholic stamp on many well known pop songs. His quirky style and golden voice have generated a cult following, much like Weird Al Yankovic, but at the other end of the emotional spectrum. Both Weird Al and Puddles have created captivating personas in our visual world, while simultaneously employing their wealth of musical talent to back up their unique styles.

One of Puddles’ rave reviews puts it best:

“If the inspiration for the Pity Party appears simple – a tragic clown with a beautiful baritone – Puddles works it until he becomes an archetypal figure, an embodiment of the romantic despair that infuses so much popular romantic music. At the same time, Puddles is fun, compassionate and an all-round entertainer.”

Check out this gem of a cover: