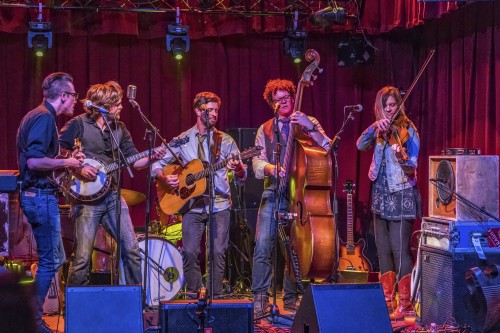 Radiohead songs work surprisingly well as bluegrass. Chris Thile’s Punch Brothers alone have covered “Kid A,” “Paranoid Android,” “Packt Like Sardines in a Crushed Tin Box,” “2+2=5,” and, with Sarah Jorosz, “The Tourist.” Then there’s one of those The Bluegrass Tribute To… albums saluting the band. And the latest killer Radio-grass cover comes from Philadelphia quintet Man About a Horse, tackling the very timely OK Computer track “Electioneering.” It’s the first single from their debut album out in May, and we’ve got the exclusive premiere below.

“Last fall, we were approached by Brookladelphia about being part of a compilation celebrating the 20th anniversary of OK Computer,” says singer/guitarist Roy Matthews about the cover’s origins. “With the U.S. in the midst of a contentious presidential election, ‘Electioneering’ seemed like a great track to cover. Even though they were written in the 1990s, Radiohead’s lyrics really resonate today, when people around the world are coming to terms with the economic effects of globalism – for better or worse.”

“Playing a loud rock song on a bunch of acoustic instruments was an interesting challenge,” adds bassist Matt Thomas. “It’s already going to sound so different from the original just from the nature of the instruments — and we really try to keep all that anger and attitude in the music, despite not having drums or distortion. And if we do it right, you kind of forget that that stuff’s not there.”

Listen to “Electioneering” below, plus a great cover the band also does of Jimmy Cliff’s reggae classic “The Harder They Come.”

Check out more Man About a Horse at their website.