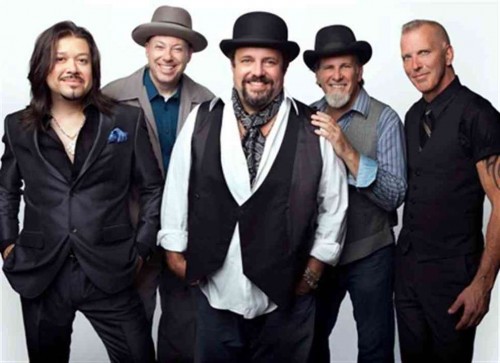 Also, they are an amazing live act, which doesn’t hurt.

The band’s roots go back to Florida in the 1980s when singer/songwriter/guitarist Malo formed a band that included bassist Robert Reynolds and drummer Paul Deakin to play music in the classic country tradition. After a self-released album, in 1991 the band was signed by MCA Nashville. During the ’90s, the Mavericks released a number of albums, with the core members augmented by a series of guitarists (with Nick Kane ultimately settling in) and keyboard player Jerry Dale McFadden. Marketed mostly as a country act during this period, they had a few songs appear on the country charts, and won a Grammy in 1996 in the Best Country Performance by a Duo or Group with Vocal category for their song “Here Comes the Rain.”

Despite critical acclaim and more Grammy nominations, a lack of commercial success and unfortunate conflict with their label resulted in the band splitting up, and Malo embarked on a solo career. They briefly re-formed in 2003, with Eddie Perez replacing Kane on guitar, for an album and tour, but the album was not successful (despite including a duet with Willie Nelson), leading to another breakup.

But the Mavericks’ story was far from over. Getting back together in 2011, the band released two albums on Valory Records, a subsidiary of Big Machine Records, and went back on the road, usually touring with additional musicians, including horns and an accordion player. Recently, the band has formed their own label, Mondo Mundo, which in this era may well be the best approach for most musicians to live off their art. A live album was released in 2016, which captured the excitement of their shows (and featured a fine cover of Neil Young’s “Harvest Moon,”) and today they released a new studio album of original material, appropriately titled Brand New Day.

Although the Mavericks have had a few hits over the years, their eclecticism has probably prevented them from greater success — too rock and Latin for country, too country for rock, etc. From the start, while they focused on original material, they have always been interested in a well-considered cover — their debut album included a charting cover of Hank Williams’ “Hey Good Lookin’,” and another of their most popular songs is a cover of Bruce Springsteen’s “All That Heaven Will Allow.” For the most part, their covers have been of artists that tended toward country, or in that hazy area of rock with strong country influences. Although, as the last cover we will discuss demonstrates, there are exceptions that prove the rule.

Enjoy these covers, listen to the Mavericks, and if you know what is good for you, see them live.

This 1951 classic from Hank Williams is filled with clever, double-entendre lyrics, and lopes along amiably. It is sort of a friendly flirtation without any menace. The Mavericks, covering the song on their first major label release (1992’s From Hell to Paradise), don’t stray too far from the country roots of the song, but move it more toward rock, and Malo’s come-on, as befits the changes in propriety in the elapsed 40 years, is edgier and sexier. The cover also features a great fiddle solo from Debbie Spring and a slowed-down coda that edges into the exaggerated eroticism of burlesque.

The Mavericks – (Tonight) The Bottle Let Me Down (Merle Haggard cover)

Country legend Merle Haggard released this lament as a single from his second studio album in 1966. Its lyrics, about how liquor can’t always numb the pain of lost love, got a suitably mournful treatment from Haggard and band (which on this session included both James Burton and Glen Campbell). It was an early attempt to mix the harder, twangier Bakersfield sound with the smoother, more produced Nashville country music of the day, and it succeeded, essentially launching Haggard’s career as a songwriter and performer. Somehow, the Mavericks (who also often cover another Haggard classic, “Okie From Muscogee”) turn the song into a swinging raveup that is often one of the highlights of their live sets. Check out this live version from the Best of Sessions At 54th Street, featuring a blistering guitar solo from Nick Kane and a full horn section.

Best known as a hit for the post-Graham Nash Hollies, “The Air That I Breathe” was written by Albert Hammond and his regular writing partner, Mike Hazelwood. It was originally released by Hammond, in a lugubrious version, on his debut album It Never Rains In Southern California. The title song of that album was much better, and was a hit for Hammond, who ultimately became best known as a writer of somewhat syrupy, mainstream songs for other acts (and as the father of Albert Hammond, Jr. of the Strokes). Hammond was born in Gibraltar, and also had some success as a Spanish-language singer, which appropriately segues into the Mavericks’ cover, released on their 2003 self-titled album. It’s faithful to the Hollies’ version, and features Malo’s best Roy Orbison-esque emoting.

The Mavericks — Call Me The Breeze (J.J. Cale cover)

Here’s another one that is best known as a cover. “Call Me the Breeze,” written and performed by J.J. Cale on his 1972 debut album, is a country blues shuffle that has been oft-covered, most famously as a classic Southern boogie by Lynyrd Skynyrd.  (Although Eric Clapton‘s tribute version is pretty well known, too.) The Mavericks covered the song for a 1994 tribute album (executive produced by Skynyrd’s Gary Rossington) unfortunately titled Skynyrd Frynds which featured much-better-known acts, including Alabama, Steve Earle, Charlie Daniels, and Wynonna Judd (whose cover of “Free Bird” is also pretty unfortunate). The Mavericks recreate the song as an uptempo Texas swing/boogie woogie number, featuring McFadden’s piano.

The Mavericks — World Without Love (Peter and Gordon cover)

Although the writer credits for “World Without Love” read Lennon-McCartney, it was actually written by Paul McCartney when he was 16, before he joined what would become the Beatles. McCartney never believed that the song was worthy of the Beatles, and they never recorded it. In 1963, McCartney offered it to his then-roommate (and girlfriend’s brother) Peter Asher, who recorded the song with his partner Gordon Waller. It became a Number One hit in both the UK and US for Peter and Gordon, who went on to record a bunch more hits. (A few years back, Asher discovered a 30-second snippet of McCartney demoing the song, which you can listen to here.) As one might expect, the original sounds like a British Invasion song from 1964. The Mavericks’ version, originally released only in Germany, but later on American collections, also sounds like it could have been recorded in the early days of rock ‘n’ roll, but with a slightly Latin lounge tinge, and with vocals that are inescapably compared to Orbison.

The Mavericks — She’s About A Mover (Sir Douglas Quintet cover)

The Mavericks recorded a great cover of the Sir Douglas Quintet’s “Nitty Gritty” on their 2015 album Mono, but I’m more partial to their cover of that band’s biggest hit, “She’s About A Mover,” which often features in their live shows, sometimes paired with “Nitty Gritty.” The Sir Douglas Quintet was a Texas band formed by Doug Sahm in 1964, and while their early songs attempted to sound British, they couldn’t help but include Tex-Mex and Cajun influences. You can hear these musical strains a little in “She’s About A Mover,” but as time went on they became the focus of the band’s sound. With this mix of influences, it shouldn’t be surprising that the Mavericks are fans. Their cover of “She’s About A Mover” highlights the fun and partying feel of the song, and pays tribute to Augie Meyers’ original distinctive organ part. Meyers, by the way, explained that the mysterious title was the result of not being able to say, back in 1964, that a girl was a “body mover.” But since no one understood what it meant to be “about a mover” the song could be released and become a hit.

The Mavericks — Us And Them (Pink Floyd cover)

Maybe the most unexpected Mavericks cover is this faithful version of Pink Floyd’s prog rock classic “Us and Them” featuring sax player Max Abrams, which is a recent feature of their live set. Hearing this, it is hard to argue that there is a genre that they can’t handle.

Dance the night away with more music from the Mavericks on Amazon.

9 Responses to “In The Spotlight: The Mavericks”