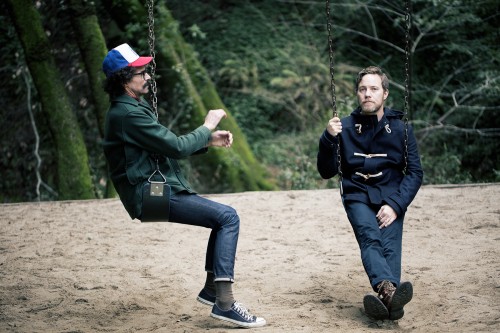 Rogue Wave recently released a limited edition vinyl record of ’80s covers, titled Cover Me (good name!). The album consists of some of Rogue Wave’s favorite songs from the decade, including a fantastic remake of Pete Townshend’s “Let My Love Open the Door.” The cover leans more towards Townshend’s “E Cola Mix” with a slightly slower tempo and hypnotic vibe.

Rogue Wave injects a serious amount of emotion into the song. They take a few liberties with the melody, which lends a fresh, improvisatory feeling. The song begins with simple guitar strums and atmospheric vocals. Easy, 80’s inspired drums and tambourine enter, complimenting the uplifting lyrics. Zach Rogue’s clear tenor vocals are very similar to Townshend’s, creating a nice link to the original while still putting his own stamp on the song.

Rogue Wave has hinted that Cover Me will eventually be released in digital format. Until then, you can listen to additional tracks as well as purchase the LP on Turntable Lab.