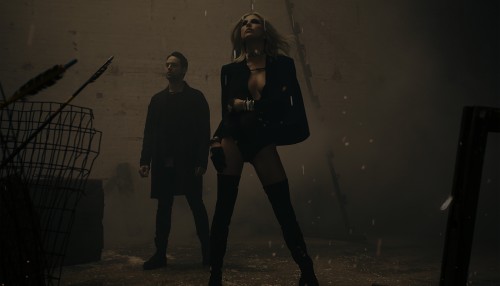 Don’t hate me. I’m not a Radiohead purist. I wouldn’t even say I’m a fan. I appreciate a lot of their songs, but mostly they make me feel antsy. I think it’s because they are constantly pushing the boundaries of comfort in a song. There’s always an edgy, frantic feeling to their instrumentation and vocals, even in the slower songs. Case in point, “Weird Fishes/Arpeggi.”

Phantogram recently recorded their take of “Weird Fishes” on Australian radio station Triple J’s Like a Version. Sarah Barthel’s smooth vocals, the drums hanging just a bit behind the beat, and the distinctive arpeggi in the guitar result in a hypnotic, dreamy version of the song that transports me to a dark coffee house, open late.

True to the essence of Radiohead, Phantogram builds the intensity through an increase in dynamics, however their ascent is more abrupt and less graduated than the original. With Phantogram, you feel like you are moving towards the predictable climax of the song, whereas with Radiohead, they skillfully take you to the climax without you even knowing it.

It comes down to this. How are you feeling today? Need to be pushed to the edge of musical insanity? Feel like reveling in the most intricate tapestry of sound imaginable from a band? Choose Radiohead. Long day? Need to unwind next to a fire with a glass of wine in your hand? Want to just zone out and be taken exactly where you want to go? Choose Phantogram. Neither rendition is wrong if your intentions are clear.

Check out more from Phantogram here