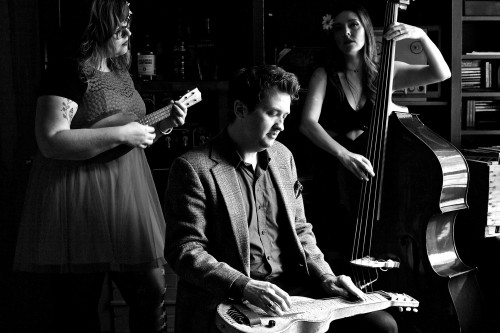 Known as Hula Hi-Fi, the band is new but the players – Josh Kaler, Annie Clements and Sarah Bandy – are seasoned, having worked with the likes of Sugarland, Amos Lee, Butch Walker, and more in their respective careers. Their abilities show; these are carefully constructed productions, not tossed-off ukulele strum-alongs.

We’ve got the debut of the complete album below, but first we asked the trio to tell us more about the project’s genesis:

Where did the idea to form this band come from?
Josh: I’ve been an avid collector of Hawaiian records for the last 10 years or so. I am obsessed with the instrumentation on these albums but I thought it would be cool to do something much darker and heart-rending with the palette. I produce modern singer/songwriter records for a living so it was exciting to record some music that is unique to the times. I also just wanna play my lap steel guitar 24/7 so it’s a perfect outlet for that.

How did you pick the songs to cover? What makes a song work well in the “Hawaiian noir” genre?
Josh: Sarah and I are 90’s grunge kids so we started out choosing tunes that were nostalgic to us. As we developed the sound more and more we figured it would be cool to find something from every decade since the 40’s that could be sentimental to anyone. Of course the melody has to soar above everything. If it made sense to do a whole album of Bjork covers we would have.
Sarah: We think it’s both challenging and sonically interesting to take this instrumentation and use it to shed new light on songs we love, from Black Sabbath (personal fave) to Air. We’re also working on a new record of originals (due out next year) that is very much “Hawaiian Noir” and also incorporates harp, omnichord, and strings.

Do you have roots in Hawaii? Where did your love for Hawaiian music stem from?
Annie: As a young teenager I had the good fortune to take a string of family summer vacations to Hawaii. I was just starting out on the bass and fell in love with the music of the islands; it was all so extremely romantic to me. Those summers really encapsulated the wistful, pining, amorous emotions budding in my teenage heart and the music and the feelings I associated with it have always stuck with me. So when my old college pal Josh relocated to Nashville asked me to join his project, it was a slam dunk for me. I finally had an outlet to express this very specific and very treasured music that has literally tugged at my heartstrings for so long.
Josh: Over the years I have found a deep admiration and connection to the Hawaiian genre. In particular Jerry Byrd’s instrumental records have been a heavy influence. The sound he achieved with the lap steel guitar will always be the blueprint for me.

Did you pick Valentine’s Day to release it for a reason?
Annie: The album is extremely romantic in my opinion. Not to be too graphic but as it came together it seemed to be the perfect soundtrack with which to make a baby. And then also to turn around and to use to lull that same baby to sleep. So it’s a full service operation we’re running here. And Valentine’s Day seemed like a fitting moment to introduce this sexiness to the people. I definitely poured the energy of lying in bed, luxuriating in getting loved on into this record. Hopefully that inspires a little more love in the world.

‘Hawaiian Noir: Volume One’ comes out on February 14th.