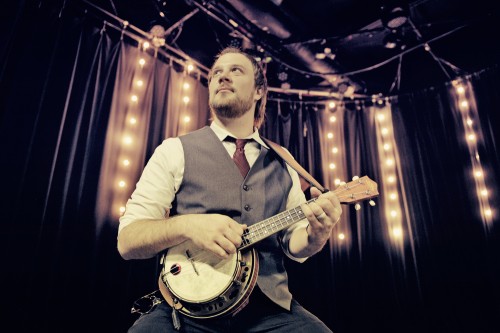 Back in 2012, the Lumineers’ “Ho Hey” was utterly and infuriatingly ubiquitous. Instantly catchy – and easily mockable – the song’s shouts and stomps quickly become a cliché as other bands tried to copy their and Mumford and Sons’ hit-making acoustic formula. Much like you can’t really blame Pearl Jam for Bush though, the Lumineers and Mumfords got more flack than they deserved for kickstarting that banjo-and-suspenders wave. And on a wonderful new cover, Austin’s Chase Gassaway redeems one of the songs that began it all.

His slow, contemplative version of “Ho Hey” doesn’t have a stomp in sight. Backed by little more than some shimmery guitar plucking and a female duet partner, his “Ho Hey” would be a lot easier to croon along to than holler. It’s the first taste of his upcoming covers album A Fly Can’t Bird and it shows he’s got a true talent for revitalizing even a song we weren’t sure we ever wanted to hear again.

“In ‘Ho Hey’, there is a bitter suppression akin to Sting’s ‘Every Breath You Take,’” Gassaway tells us. “I wanted to explore that side of the story and the interpretation that came out was minor and melancholy. I felt like it needed to be heard from this viewpoint.”

Listen to Gassaway’s cover oh “Ho Hey” exclusively below. Other covers on A Fly Can’t Bird include The Temptations’ “Ain’t Too Proud to Beg” and John Legend’s “All Of Me” as well as songs by his Texas peers like Quiet Company and Alpha Rev.

One Response to “Chase Gassaway De-Stomps The Lumineers on a Beautiful, Quiet “Ho Hey” Cover (Premiere)”