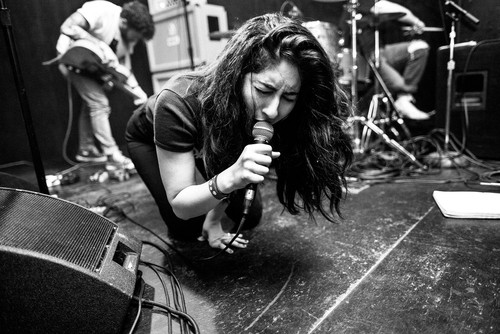 The final track from Nirvana’s breakthrough classic Nevermind doesn’t get as much cover love as the rest of outstanding tracks on that album. “Something in the Way” is almost a fragment of a song; you have to strain your ears to interpret Kurt Cobain’s whispered lyrics (second verse, same as the first) and in the end you are left with only a piece of a haunted tale. The refrain feels loud in comparison, but the most prominent contributor there is a cello. It’s a beautiful and chilling song, but tough to make it your own with so little content, already done so well.

In the video below, Kristina Esfandiari, of King Woman, stands on stage with the doom metal group Thou. Their cover of Nirvana starts even more subdued than the original, with Esfandiari mumbling her lines at a sluggish pace. The difference from the original isn’t huge, but already things are sounding pretty good. When the rest of Thou enters during the chorus, though, it becomes clear that this will not be a note-for-note cover. Bryan Funck’s screaming vocals pair shockingly well with Esfandiari’s and the band’s unhurried, heavy approach hits like a sledgehammer. For those unfamiliar with doom metal the juxtaposition of the heaviness and the slowness can be jarring, but this is a great introduction to the style.

Watch the concert video below. This is the show’s opening track, so feel free to stick around for the whole show.

Check out more from Thou at their website. For more from Kristina Esfandiari check out her bands King Woman and Miserable.