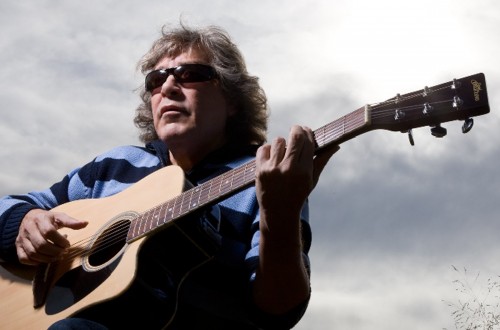 “You know,” Steve Buscemi famously says in Fargo, “Jose Feliciano, you got no complaints.” That wasn’t always the case – his rendition of “The Star-Spangled Banner” before game five of the 1968 World Series caused much wailing and gnashing of teeth back in the day – but Feliciano’s sheer talent and the undeniable prowess of his guitar playing, not to mention the length of his career, have seen him outlast all the negativity and become one of the most admired musicians playing today.

Blind since birth, the Puerto Rican singer-songwriter has incorporated any number of styles into his songs – jazz, Latino, hard and soft rock, pop, soul, even classical filtered their way through his fingers. His own songs have brought him lasting fame and fortune – how many of you gave the volume knob a healthy nudge last month when “Feliz Navidad” came on? – but it’s his covers that arguably see him shine brightest, as he can put his distinctive stamp on anything, no matter how well known the song or the artist, and make it eternally his. See for yourself what he does on the five interpretations that follow…

Jose Feliciano – The Flight of the Bumblebee (Nikolai Rimsky-Korsakov cover)

“The Flight of the Bumblebee” is the gold standard for speed-playing of guitar – literally: the Guinness Book of World Records requires the Rimsky-Korsakov interlude to be played mistake-free before they’ll recognize the performance. While Feliciano’s studio recording won’t set any speed records, it still counts as error-free. But check out this stunning live version, where he accidentally drops his guitar pick partway through and carries on thrillingly. Sometimes it takes mistakes to reveal true genius.

Jose Feliciano – California Dreamin’ (The Mamas and the Papas cover)

It was Feliciano’s fourth album, Feliciano!, that broke him in America, winning him Grammy Awards for Best New Artist and Best Male Pop Vocal Performance for his cover of the Doors’ “Light My Fire.” The all-covers album opened with his version of the Mamas and the Papas’ “California Dreamin'” which conveyed so well the longing for warmth, and not necessarily the meteorological kind.

Jose Feliciano – The Windmills of Your Mind (Noel Harrison cover)

The theme song to the Steve McQueen movie The Thomas Crown Affair, “The Windmills of Your Mind” won an Oscar for Best Original Song. Its singer, Noel Harrison, wasn’t able to perform the song at the ceremony, so Feliciano, who recorded the song for his 10 to 23 album, took his place. Harrison didn’t much care for what had been done to the song, saying that “he made much too free with the beautiful melody, in my humble opinion. But that’s jazz.” No – that’s Feliciano.

“Golden Lady” was one of the deep album cuts on Innervisions, the 1973 entry in Stevie Wonder’s supernova-hot streak. On an album filled with songs about the societal issues of the day, “Golden Lady” found itself passed over, a most unusual position for a Wonder-penned love song to find itself in. But Feliciano, who shared an unique understanding of innervisions with Wonder, picked up on the song’s specialness and gave it his own spin on 1974’s And The Feeling’s Good.

If you think of Jose Feliciano as just an easy-listening lounge act, think again. Jimi Hendrix himself (no stranger to controversies about the playing of the National Anthem) once jammed with him and complimented him on his guitar playing. Feliciano returned the favor with this rocking cover of “Purple Haze,” delighting the crowd and throwing in snatches of “Eruption” and “Beat It” toward the end for good measure.

You can find many different compilations of Jose Feliciano’s greatest hits on Amazon.