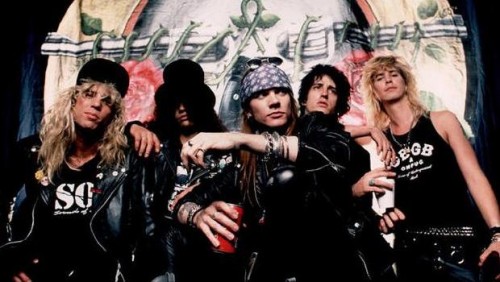 One could make the argument that ’80s rock ‘n’ roll changed the moment W. Axl Rose stepped off a bus with a piece of hay between his teeth. That was the indelible image that opened the video for “Welcome to the Jungle,” a song that opened with a great “SundaySundaySUNDAYYYY!!” riff from Slash and took the listener on a ride – no, a careen through the worst that the big city had to offer. It opened the best-selling debut album of all time, 1987’s Appetite for Destruction, with as big a bang as one could ask for, and to this day it intimidates visiting teams at sporting events nationwide.

The best covers of the song wouldn’t dream of replicating what Guns N’ Roses took care of thirty years ago, choosing to take a bus ride very different from Axl’s. Here are some of the depots the song wound up in…

It’s been a while since we’ve written about Swedish lounge metallists Hellsongs, who do acoustic versions of hard-rockin’ tuneage. 2010’s Minor Misdemeanors featured their gentle take on “Welcome to the Jungle,” which turned the jungle into more of a fern bar.

Dustin Burnett, mild-mannered engineer/producer, has a secret identity as Zayde Wølf (mustn’t forget the slash!), making music that’s served as the soundtrack to trailers for Jack Reacher 2, Pride and Prejudice and Zombies, and more. His take on “Welcome to the Jungle” sounds perfect for trailers, full of dramatic pauses and thundering drums, not to mention an ending that leaves you hanging from the cliff of your choice.

Lucy Campos and Sergio Murilo formed the duo Dressing Rock and recorded 2012’s Black Rock Road, a cover album of hard rocking acts from Aerosmith to Zeppelin. “Welcome to the Jungle” fits in nicely; one reviewer found it “worthy to elicit compliments from the most radical headbangers.” (I should note that this review was translated from the original Portuguese.)

Side Project – Welcome to the Jungle (Guns ‘n’ Roses cover)

Luka Vidović and Anja Papa of Zagreb, Croatia, formed a band called Side Project, immediately causing bands from Hot Tuna to the Tom Tom Club to the Foxboro Hot Tubs to wish they’d thought of that name. When they posted their cover of “Welcome to the Jungle” on YouTube, Side Project warned, “It might be too brilliant for your ears to take!” On the other hand, it might not – but it’s a pretty cool take nonetheless.

Ali John Meredith-Lacey isn’t the sort of name that grabs a listener’s attention, but rest assured that the cover of “Welcome to the Jungle” recorded by Meredith-Lacey under the nom de tune Novo Amor will embrace you in a way you’re not used to – perhaps appropriate, as it was originally recorded by the Welshman for an Axe Body Spray advertising campaign. No matter its origins, this is a cover that’s far from its origins and very much at home in its new setting.

You can get the original “Welcome to the Jungle” from Amazon.

One Response to “Five Good Covers: Welcome to the Jungle (Guns N’ Roses)”