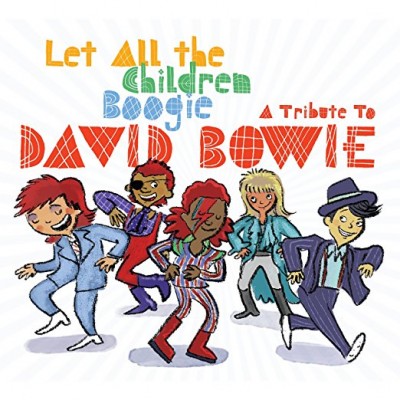 And while we may have lost the man himself, we will always have his music. His is a catalog so vast and stylistically diverse as to perfectly warrant the stylistically diverse assemblage of artists and styles gather here on the newly-issued Let All the Children Boogie. Stripped to their barest elements and rebuilt in individually idiosyncratic ways, the work of David Bowie presented here remains wholly recognizable, yet affords listeners an entirely new way of hearing these well-known songs.

Predictably, the bulk of the material collected here comes from Bowie’s early-to-mid-‘70s golden age, encompassing his Ziggy Stardust persona up through his Berlin years and into his ‘80s pop superstardom. From this, Hunky Dory and The Rise and Fall of Ziggy Stardust and the Spiders from Mars, arguably two of his best albums overall, are then used as the majority of the collection’s source material. The former provides four tracks (“Oh! You Pretty Things,” “Kooks,” “Life on Mars?” and “Changes”), while the latter offers three (“Ziggy Stardust,” “Lady Stardust,” and “Starman”), all of which have been reshaped using the structural bones of the originals layered with various acoustic and kid-friendly instruments.

Needless to say, ukuleles, kazoos, glockenspiels and toy pianos abound but by no means dominate the collection. When they do appear, they are never used to cloying effect, each song given a sort of reverential treatment that refrains from dumbing down the source material and retains the underlying spirit of each. On “Kooks,” Justin Roberts and the Not Ready for Naptime Players take the original’s basic premise, heighten its thematic elements – that of parents bringing a child into the world and teaching them to remain true to who they are – add the requisite cutesy instrumentation, and deliver an earnest performance not far removed from the original.

One of several impressive deviations – and real highlights – from the collection’s overriding musical formula comes from Antibalas, who take “Let’s Dance” and somehow manage to turn it into an even more irresistible dance anthem. From the first downbeat, only the most jaded of listeners will be able to remain still throughout as the band fuses the original’s new-wave synth-pop with the West African horns and rhythms for which the band is known. It’s a perfect example of a stylistic fusion that remains true to the original intention of the song, yet manages to transcend the well-known original to become something wholly new and different. Similarly, Wumni’s read of “Fashion” is an unhinged West African groove struck through with clattering electronics and frontwoman Wunmi Olaiya’s staccato vocals. Fitting perfectly alongside the Antibalas track, it makes a strong case for an all Afropop covers album tackling 1980s David Bowie.

Ted Leo’s take on “Heroes” is a simmering, explosive celebration that rides a wave of crescendo into unbridled joy. By breaking the verses down to just bass and rhythm, Leo finds a great deal more space to work with when the song finally explodes into its triumphant conclusion. Modernist jazz piano prodigy Marco Benevento’s symphonic piano underscoring of Storey Littleton’s sympathetic vocals on “Life on Mars?” threatens to surpass the original in terms of melodic sophistication and sheer iconic status. It will be hard to move on from this version not longing to hear Benevento’s melodic flourishes and subtle vocal harmonizing throughout. Closing with “Ziggy Stardust,” Rhett Miller manages to perfectly sum up the collection’s appeal with a heartfelt acoustic rendition of the 1972 classic.

Those looking to put together an album of well-known pop songs aimed at children would be well served to use Let All the Children Boogie as their guiding template. Not only are these versions that can be enjoyed by the entire family, but they also complement the originals in a way few similarly-themed collections have managed thus far. Let All the Children Boogie is a must for Bowie fans of all ages.

Let All the Children Boogie is available from Amazon.