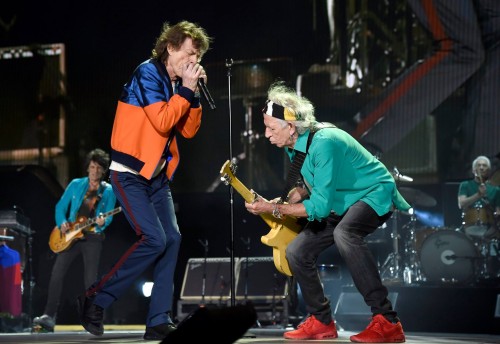 The Rolling Stones haven’t released an album since 2005, but in December they’ll finally return – and with their first-ever covers album to boot. Titled Blue & Lonesome, the album contains their versions of 12 classic blues songs by Little Walter, Howlin’ Wolf, and more. They’ve snuck a blues cover on LPs here and there in the past (“Love in Vain” on Let It Bleed, “You Gotta Move” on Sticky Fingers) but this is the first time they’ve filled a full album with them. They’ve already released the first track, Little Walter’s “Just Your Fool,” which you can hear below. And this weekend, they performed another album cut at Desert Trip festival (aka “Oldchella”): Eddie Taylor’s “Ride ‘Em On Down,” which they last performed in 1962!

And that’s not the only cover they performed at Desert Trip; they also covered the Beatles’ “Come Together” for the first time ever, presumably in honor of the following evening’s headliner Paul McCartney. For a band not generally known for mixing up their setlists, it was a nice gesture, and a solid performance. The next night, McCartney returned the favor – sort of – by playing “I Wanna Be Your Man,” the song he and John Lennon wrote for the Stones. Which is kind of nice, but not the same thing – you’re still showing off a song you wrote, Paul, and explicitly pointing out you gave the Stones their first hit doesn’t help. Maybe he was miffed they’d covered a John song. Anyway, watch the Stones’ Beatles cover and McCartney’s kinda-not-really Stones cover below as well.