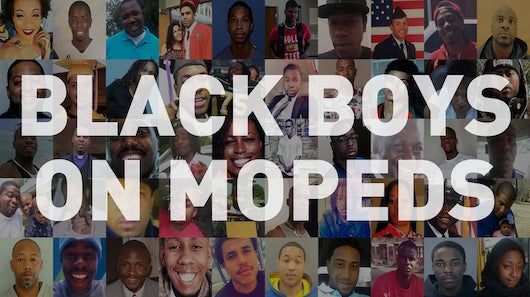 Sinéad O’Connor’s song “Black Boys on Mopeds” has unfortunately seen a cover resurgence of late – unfortunately not because it isn’t a great song, but because the 26-year-old lyrics about a black man getting killed by police shouldn’t feel so timely. Last year we named EMA’s cover of the song one of the best of the year, and now Vermont quartet Swale has produced their own powerful cover. It explicitly ties the song into the Black Lives Matter movement by setting it to a video montage of the over 140 African-Americans killed by police between January 2015 and today.

“At the beginning of July there were the high-profile police shootings [in Minneapolis and Baton Rouge] and that song came to mind,” band member Eric Olsen tells us. “We had a show soon after and though we’d never played it, we just called it out live. You know, like ‘It’s in B!’ I’m not even sure everyone in the band had even heard the song before.”

The new video’s power comes from seeing the familiar names – Freddie Gray, Sandra Bland, etc – surrounded by dozens of names most people haven’t heard. “I hadn’t seen any sort of aggregator of fatalities at the hands of police, so I started researching that, trying to bring some names to people who weren’t widely named,” says Olsen. “My wife [band member Amanda Gustafson, who sings on the song] and I were on vacation and I’m sitting on a river in the whitest part of upstate New York researching these horrible stories. The juxtaposition was profound for me. It was a dark rabbit hole to go down and I was kind of beside myself with despair. Collecting the data on all these people took some time, and by the time I was done more people had been killed. So I added more.”

The end result is a moving and tragic video that makes clear the sheer numbers behind the headlines. As Olsen says, “Sinéad O’Connor was inspired by a particular killing in England almost thirty years ago and the fact that it still resonates today is frightening.”