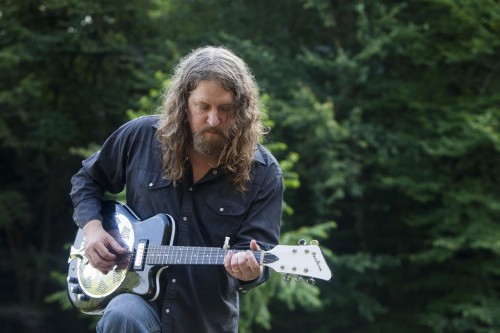 If you haven’t heard of an instrument called the “bojotar,” don’t feel bad. Only one person in the world plays it: Bow Thayer, an Americana musician up in Vermont. It’s a custom-built combination of the banjo, electric guitar, and dobro. He’s trying to spread the word though, and got a tip from banjo master Béla Fleck. “Béla told me the best way to sell people on the thing is to become a master of it myself,” Thayer said, “to find out what it can really do and blow people away.”

He’s done just that, and his latest demonstration of the bojotar’s prowess comes on a new tribute album to two early American musicians: Dock Boggs and Mississippi Fred McDowell, two obscure rural singers brought to wider attention when recorded by field musicologist Alan Lomax in the ’50s. Thayer titled his tribute The Source and the Servant and has posted his cover of the Boggs song “Sugar Baby” (an excellent demonstration of the bojotar in action) and a note:

There are so many great bluesmen and songsters in our musical history it is hard to fathom. And really most of them have gone unnoticed. So why the music of Dock Boggs and Fred McDowell is so relevant in my own musical journey is somewhat of a mystery. Whether it is fate or coincidence, the fact is, these guys struck a chord with me, a deep one, and one I did not even realize until recently. I was living in Boston going to art school just outside of Kenmore Sq. during the late eighties and nineties and fairly unimpressed with what was coming over the airwaves. This was a time when cassette tapes were on the way out and digital music was becoming the norm. I found myself perusing all the record stores in the area just searching for something real and cassettes were super cheap, like 2 bucks a pop. So I dug hard into all kinds of blues, bluegrass, old time, folk and jazz. The cassettes being used were so cheap they were almost disposable. I did not mind losing them, giving them away or not taking good care of them. Many disintegrated in the filth of cigarette butts, coffee and grime under the seat of my car, or the turpentine and cobalt dryer in my paint box, but there were survivors. It may have been subconscious that Alan Lomax’s field recordings of Dock and Fred got a bit more attention. Listening back to my catalogue of music I hear it now…. I didn’t then. As I write this I am staring down the barrel of a half century in this life of obscurity, and I am beginning to make sense of what I am doing and why. The only way to really relate it is through music , so here ya go….

I would like to make a disclaimer – I am not trying to mimic these guys in any way. After all I am a white, middle class kid from New England and my goods are not their goods. But I do want to give the utmost credit to what these two storytellers offered up in their lifetime. So many people have taken from them without giving them their due. What they offer is more than just folk music – it is a window into history, a way of life, and a taproot into the very essence of joy and sorrow within the human soul. In their time they were not rich or famous, but their significance transcended celebrity; they – along with others who fell beneath the cracks of fame and fortune – are conduits into the lowest and highest common denominators of who we are. I only hope I can do some justice.

Preorder ‘The Source and the Servant’ on Bandcamp. And, should you be inspired, buy your own bojotar here.