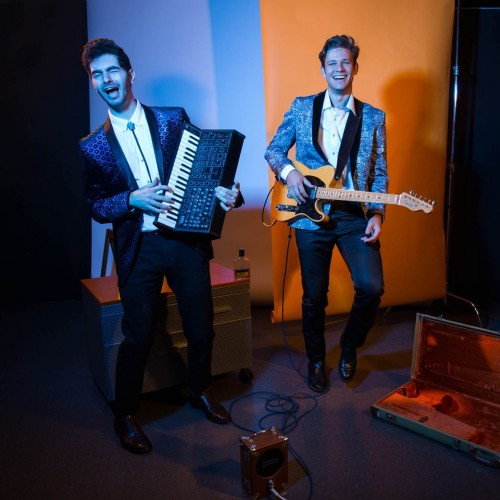 It’s been a good year for dancey covers of classic rock hits. Hot Chip covered “Dancing in the Dark.” LCD Soundsystem covered Prince and Bowie. And now the Brooklyn-via-Burlington duo argonaut&wasp electo-up the Rolling Stones‘ “Beast of Burden.” After opening with a little “You Can’t Always Get What You Want”-style organ, the synths kick in, blending with funky Chic guitars to nod at the original just enough without being overly reverential.

“This spring we had the amazing opportunity of playing the book release party for Rich Cohen’s The Sun & The Moon & The Rolling Stones,'” they write. “To celebrate the release, the band put our heads together to rework, reinterpret, and create covers of iconic stone’s songs. While it turned out the three songs we chose to debut at the performance were all off of Some Girls (of which Rich Cohen considered the Stones’ last great work), we combined dance instrumentation and the a&w sound to create something truly unique. During the week leading up to the book release party we had locked in some studio time at Germano Studios (which turned out to be the same location where Keith recorded his last solo record) and tracked our version of Beast of Burden. Our cover speaks to the themes of the original record, but we did our best to give it a ‘dance’ upgrade.”

Listen to argonaut&wasp’s “Beast of Burden” below. Then as a bonus, hear another entry in the “Vermont bands do electropoppy classic rock covers” category from earlier this year: Madaila paying tribute to David Bowie on “Starman.”