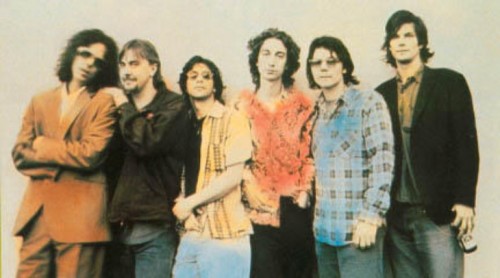 Back in the late 1980s, as the alt-country/No Depression sound began to spread, a group of bands centered in the Minneapolis area often played in the same venues. Sometimes members of these bands would do cover shows for fun. Although even the members of the band remember the band’s fittingly murky origins differently, ultimately, some of these friends began to perform as “Golden Smog” (originally a Flintstones reference), mostly playing covers. The core membership coalesced as Gary Louris and Marc Perlman of the Jayhawks on bass, Dan Murphy and Dave Pirner of Soul Asylum, Kraig Johnson of Run Westy Run (and later the Jayhawks) and Chris Mars of the Replacements (although the drum chair in the band has a near Spinal Tap-level rotating door), often augmented by guest musicians and singers. It was like seeing an incredibly talented bar band.

In 1992, the group released an EP of covers, On Golden Smog, with one track sung by Soul Asylum’s road manager, and the rest of the band credited pseudonymously for contractual reasons. According to Murphy, a hotel manager in Arizona told him that to thwart nosy fans, when Bon Jovi checked in to the hotel they registered under their middle names and the street they grew up on (a version of the “porn star name”). Following this system, the album was credited to “David Spear” (Murphy), “Anthony James” (Pirner), “Michael Macklyn”, (Louris), “Raymond Virginia” (Perlman), “Jarrett Decatur” (Johnson) and “Eddie Garfield” (Mars). Over the next couple of years, though, as Soul Asylum and the Jayhawks became popular in their own right, the Smog mostly dissipated.

Louris found kindred cover lovers in Jeff Tweedy and Jay Farrar when he guested on Uncle Tupelo’s 1991 album Still Feel Gone. They, along with Brian Henneman of the Bottle Rockets and former Tupelo drummer Mike Heidorn, played cover shows in the St. Louis area as “Coffee Creek.” When Uncle Tupelo broke up, Tweedy (while finishing Wilco’s debut album and in a reportedly fragile state of mind) accepted the invitation of Dan Murphy (who Tweedy had interviewed as a high school student) to come up to Minneapolis, where he began interacting with the other members of Golden Smog. By that time, they had started playing some originals, first by Johnson, and then by other members, who began to contribute songs that, for various reasons, weren’t working for their main band.

The first full-length Golden Smog album, Down By The Old Mainstream, released in early 1996, had 12 originals and 2 covers, and included Scot Summit (Tweedy) and drummer Leonardson Saratoga (Noah Levy of the Honeydogs), but not Pirner. It was fun, and it is easy to hear that the members were enjoying their busman’s holiday. Because of the relative stardom of Wilco, the Jayhawks and Soul Asylum, many reviews of the album referred to them oxymoronically as an “alt-country supergroup.” After touring, and replacing Mars with former Big Star drummer Jody Stephens, the band recorded a fine if somewhat less exuberant album of all original songs, 1998’s Weird Tales, and toured again. And that seemed like it might be pretty much that for Golden Smog, as its members got busy with their main projects.

But in 2005, Golden Smog released Another Fine Day, with guest appearances from Tweedy, drummers Stephens and Linda Pitmon, and others. It featured only one cover; they doubled that on 2007’s Blood On The Slacks. There have been no more releases from the band since then, although they still do occasional shows, often as benefits (including a mini-set with Tweedy opening a rally for then-presidential candidate Barack Obama in Minneapolis in 2008), many times with guest musicians. And the Jayhawks, and Wilco (and Tweedy) at least, sometimes trot out a Smog song or two during shows.

To keep it interesting, we will focus on Golden Smog covers that weren’t on their major releases. Instead, we will look at live tracks that bring the band back to their cover band roots. Which means that they can sometimes be a bit sloppy. But then, that’s sort of the point.

It is not surprising that a group of musicians who loved country rock and punk would cover Neil Young, whose influence in these genres (and remarkably many others) is profound. Young’s relatively early song, “On The Beach,” is a downbeat meditation on fame, but its emotional intensity is anything but mellow.  This version, from a Dutch radio performance in 1996, was released on a 1998 promotional EP featuring the Weird Tales song “Keys.” It may be a tad more polished than Young’s purposefully ragged original, but is similarly both quiet and intense, with Young-like quavery vocals (possibly from Johnson – the Internet does not reveal all secrets.) And here are a couple more Young covers done by the band over the years.

Golden Smog – Hanging On The Telephone (The Nerves/Blondie cover)

“Hanging On The Telephone” was originally released by the Nerves, a short-lived Los Angeles power pop band that is remembered, if at all, for this song. Of course, Blondie’s cover of “Hanging On The Telephone” is a new wave classic. The Golden Smog version here, recorded at a 1996 show at the Cat’s Cradle in North Carolina, rocks more like the Blondie version that the poppier, slower original. Also at that show, the band, with Tweedy on vocals, ripped through an excellent cover of “(What’s So Funny Bout) Peace, Love And Understanding,” which easily could have qualified for our earlier feature on that song.

A staple of classic rock radio, Elvin Bishop’s “Fooled Around And Fell In Love” was originally sung by band backup singer Mickey Thomas, who later went on to help destroy any vestige of quality left in Jefferson Starship. This version, which was regularly trotted out by the Smog, is from a 1998 show on the band’s home turf at the First Avenue in Minneapolis. It is sung by Louris, who gives it a full-on ironic cheesy lounge singer treatment. Murphy’s guitar solo and the violin from guest Jessy Greene are also highlights of this otherwise pretty faithful cover.

A version of Golden Smog did a few shows in 2004, including two at New York’s Bowery Ballroom, as a benefit for Federation For Village Artists. The band was joined by a number of guests, including Jenni Muldaur, Steve Wynn (of, among other projects, Dream Syndicate, Gutterball and the Baseball Project, which is not a novelty act), James Mastro (of the Bongos) and others. It was a loose affair, with Golden Smog songs and covers in nearly equal proportion. Among the great covers done that night was a version of Eddie and The Hot Rods’ punk anthem “Do Anything You Wanna Do” and a faithful version of “You’re So Vain,” sung by Louris. Who is this song about? James Taylor? Mick Jagger? Warren Beatty? (Who, appropriately, has believed that it was only about him.) Carly Simon has been coy about it over the years, even auctioning off the information for charity (winner Dick Ebersol was sworn to secrecy). One more note: “Vain” was a surprising segue from a cover of the Talking Heads song “Life During Wartime,” indicating that these guys could program an interesting radio station.

In 2012, Golden Smog came together with other Minneapolis area musicians to participate in a Kill Kancer benefit concert honoring the seventh anniversary of the death from throat cancer of Soul Asylum bass player Karl Mueller. This time the core group was augmented by Jayhawks’ drummer Tim O’Reagan, violinist Greene, Chan Poling of the Suburbs (whose wife, Eleanor Mondale, was also a cancer victim), Dave Pirner and vocalist Janey Winterbauer, who took the lead on this fine cover of the Velvet Underground’s Nico-sung “Femme Fatale,” about Edie Sedgwick. To give an indication of their range, that night they also aired out the Badfinger/Harry Nilsson ballad “Without You.”

Shroud yourself in some Golden Smog at Amazon. And put your Golden Smog name in the comments – I’m David Woodglen!

4 Responses to “In the Spotlight: Golden Smog”