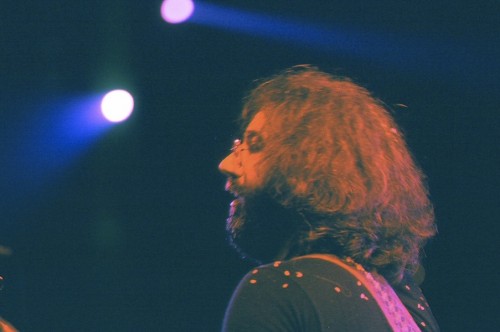 Though New Orleans is a long way from San Francisco, Garcia’s affinity for the city’s music makes a certain amount of sense. New Orleans jazz and San Francisco psychedelia both valued spontaneity, improvisation, and letting the moment carry the music. And there’s been a certain amount of cross-pollination. In 1976 Garcia performed four shows with R&B piano icon James Booker (some of those collaborations are included here). Since the ’70s, New Orleans has had its own jam band community, spearheaded by bands like the Radiators and more recently Galactic. And in a fun historical footnote, New Orleans was the site of a famous 1970 Dead drug bust that later made it into the “Truckin'” lyrics: “Busted, down on Bourbon Street / Set up, like a bowlin’ pin / Knocked down, it gets to wearin’ thin / They just won’t let you be, no.”

As this collection shows though, Garcia didn’t hold the bust against the city or its music. Some songs, like “Iko Iko,” were longtime Dead live staples. Others, like “You Are My Sunshine,” he only performed once. You can download a couple highlights below – including an amazing 13-minute Fats Domino cover – then the full 15-song set below. We’ve also included the collection’s original liner notes, which offer an informative look at each song.

It’s no coincidence that this compilation is dominated by James Booker and, to a lesser extent, Nicky Hopkins, two of the boogie-woogiest piano players the world has ever known. And since eight of the 15 tracks feature one or the other doing songs Jerry only played with them, many of these tracks selected themselves. None of the Booker tracks were played in any other incarnation of Jerry’s side projects. Since there are only three recordings over four nights with Booker, there was no way to get a wide variety of choices.

Of the other songs done by the JGB, only two, Get Out Of My Life Woman and I’ll Take A Melody (both written by Allen Toussaint), were done with any regularity. GOOMLW was an easy choice, taken from Jerry’s 10/4/86 first post-coma performance. There are better recordings of it but the electricity and warmth coming from the audience at this historic show made this one easy. Melody was also an easy selection. A 1980 Ozzie Ahlers song had to be included.

While Stagger Lee is a Garcia/Hunter composition, the story of Stagger Lee (and Billy DeLion) is deeply rooted in the rich tradition of New Orleans music. There are two versions here, one with the Grateful Dead and one from Jerry’s only solo show. Although What A Wonderful World was written by non-Louisianans Bob Thiele and George David Weiss, it was popularized by Louis Armstrong. So it’s inclusion is also necessary. There was no more famous New Orleans musician than Satchmo. The version included here is from Jerry’s 50th birthday.

THE HISTORY
All By Myself: Performed 20 times. 17 from April, 1975 with the Legion Of Mary, through the Nicky Hopkins and James Booker bands. Brought back twice in 1978 and then once more in August, 1980.
Written by Fats Domino http://rockhall.com/inductees/fats-domino/bio/

Don’t Try To Be Your Brother’s Killer: Performed once in rehearsal on Jan. 7, 1976.
Written by James Booker http://www.allaboutjazz.com/php/musician.php?id=5177

Get Out Of My Life Woman: Performed 63 times beginning in July, 1984 until September, 1994.
Written by Allen Toussaint http://www.allentoussaint.com/

Iko Iko: Performed by the Grateful Dead 185 times beginning in May, 1977 and remained a regular part of the repertoire until the end.
Written by James “Sugarboy” Crawford http://www.offbeat.com/2002/02/01/james-sugar-boy-crawford/

I’ll Take A Melody: Performed 212 times by the JGB, beginning with the Legion of Mary in April, 1975 and remained a regular part of the repertoire through November, 1990. It was then brought back twice in early 1994.
Written by Allen Toussaint http://www.nonesuch.com/artists/allen-toussaint

Right Place, Wrong Time: Performed twice, on Jan. 7 and Jan. 10, 1976. It was part of a medley on Jan. 7, the version included here.
Written by Mac Rebennack http://www.drjohn.org/

Something You Got: Performed once in rehearsal on Jan. 7, 1976
Written by Chris Kenner http://en.wikipedia.org/wiki/Chris_Kenner

Stagger Lee: Performed by the Grateful Dead 147 times including regularly from August, 1978 to December, 1979. It reappeared a couple of times in August, 1982 then returned to the regular rotation in June, 1985 and remained there until June, 1995. Jerry also performed it acoustically by himself and with Garcia & Kahn three times in 1982.

You Are My Sunshine: Performed once on Jan. 10, 1976.
Written by Jimmie Davis and Charles Mitchell http://en.wikipedia.org/wiki/Jimmie_Davis