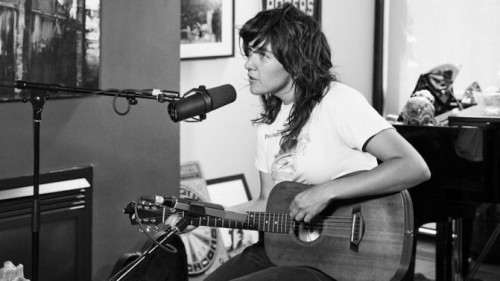 In May 2014, Cover Me wrote about Courtney Barnett, The Up And Coming Quirky Australian Singer-Songwriter, covering The Lemonheads‘ “Being Around.” Two years later, Courtney Barnett, The Critically Acclaimed And Pretty Big But Still Quirky Australian Guitar-Slaying Major Festival-Destroying Singer-Songwriter, covered the Lemonheads again for a stripped down acoustic performance of the alt-rock band’s 1993 song “Paid To Smile” on “The Strombo Show” on Canada’s CBC Radio 2.

Like the best cover artists, Barnett forces you to reexamine a song’s entire meaning by stripping or changing the song’s original context. The Lemonheads’ original, though as pleasant as it is jangly, is hard to decipher behind those ’90s drums and ooh-la-las and is easy to write off as Cameron Crowe-Core. But with just an acoustic guitar and voice, Barnett forces you to listen to the lyrics, and you realize this song carries a certain weight if you associate it with someone you’ve known in your life who has projected happiness for money. Even if the song was not meant to sound so lovelorn, the lines “you get paid to lie / you get paid to smile” gain new meaning thanks to Barnett’s melancholy focus on the word smile and her simple yet effective acoustic strumming.

The most amazing part is that Barnett looks like she’s not even trying; she could probably sleepwalk through this acoustic cover and I’d still be contemplating every sad face I’ve ever seen. What a talent. God bless you, Courtney Barnett.

You can watch Barnett’s cover of The Lemonheads at the 5:50 mark, but you’ll want to watch the whole video, which includes acoustic renditions of her own “Dead Fox” and “Nobody Really Cares If You Don’t Go To The Party” off last year’s album of the decade contender Sometimes I Sit and Think, And Sometimes I Just Sit.

Check out more of Courtney Barnett on her website. Photo by Vanessa Heins.