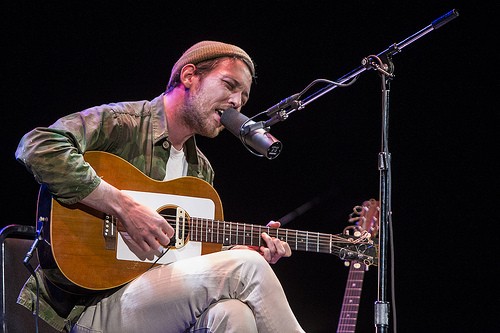 Earlier this month, a beardless Robin Pecknold covered Fred Neil‘s “The Dolphins” during the Fleet Foxes frontman’s solo set opening for Joanna Newsom’s “special guest” at Seattle’s sold-out Paramount Theatre. Pecknold ended his short performance with a stripped-down interpretation of one of the best songs by the cult ’60s Greenwich folk-rocker.

Whereas Neil’s 1966 moody original is accompanied by shuffling drums and shimmering guitars, Pecknold is able to convey the song’s isolated message across with just his voice, which has seemingly endless range, and his acoustic guitar. It’s a testament to how great this song is (though you’d think a song called “The Dolphins” would sound happier?) and to Pecknold’s ability to transform seemingly untouchable folk standards into his own creations (he’s also one of the few who can do Bob Dylan justice).

It’s good to know that there’s life after Fleet Foxes. I hope we hear more from him soon.