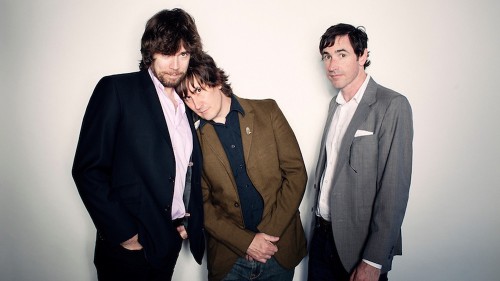 Last week, the Mountain Goats wrapped up a short tour at NYC’s City Winery. It’s a venue much smaller than they’d normally play in town, which is no accident: the concept of the tour was playing lesser-known songs and rarities in listening-room environments. As frontman John Darnielle put it, “smaller rooms, audible frequencies, making eye contact with people in the back row”. These shows were for the superfans (though is there any other kind with this band?). Fittingly, the tour finale saw three rare and new covers: Dio’s “Rainbow in the Dark,” Goldfinger’s “Superman,” and even a huge singalong on the classic western song “Home on the Range.”

Darnielle performed both “Superman” and “Home on the Range” solo, covers he’s never done before (though a few years ago he tweeted he wanted the former’s lyrics inscribed on the inside of his coffin). In both cases he took humorous asides midway through to correct grammar or nonsensical lyrics, which in “Home on the Range” led into a monologue about how in the dead silence of space no one can hear you scream.

Darnielle has covered “Rainbow in the Dark” a couple times before solo over the years, but never with drummer Jon Wurster accompanying, who brought a new energy and emotion to the sparse ballad. Darnielle said later they’d never even practiced it, a testament both to Wurster’s prowess and to the spontaneous feeling of these shows.

“A good stage where you’re always welcome is a like a home,” Darnielle said before “Home on the Range.” Hopefully he’ll feel equally at home the next time they go on tour to bust out some more new covers.

Listen to the three covers below, and the full set at NYCTaper.