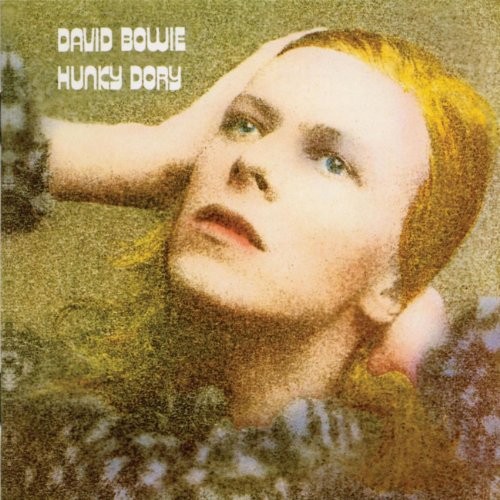 I remember the time when suddenly everybody first got Bowie, the days of Ziggy Stardust and the Spiders from Mars, early ’70s, but my dalliance had begun earlier. I recall hearing “Changes,” or should I say, “Ch-ch-ch-changes,” on the radio at home, sounding all awkwardness and angst, immediately marking my card. Inevitably when Ziggy came along, all those of my age and place on the autism spectrum disorder “preferred” Hunky Dory. And I did too, swiftly selling my copy of Ziggy as it was “too commercial.” Hey, give me a break – I was 15, and today, aeons later, I regret that. But I still prefer Hunky Dory, even the dodgy tracks everyone skips.

A fact oft forgotten: coming out in 1971, Hunky Dory wasn’t a massive success at the time, having to wait until the later success of Ziggy to feature more prominently in the sales figures. Since then the accolades have been falling on top of one another, as the retrospective plaudits rate it ever the better. (My smug internal continues to tell them so.)

There are surprisingly few covers of some of the songs, just as there are annoyingly so many of others. I could spend an article entire on “Life on Mars,” so frequently and so fallibly has it been tackled. Is it Bowie’s best song? It seems that opinion drifts that way. Given so much of its majesty is evoked by Rick Wakeman’s piano – yes, that Rick Wakeman – share with me this tribute to the song’s author from that consummate musician. (So what cover have I chosen for this piano-led masterpiece? Read on.)

I can so easily imagine McCulloch singing “Changes” into his hairbrush as a wee boy, the Bunnymen Bowie influences obvious, but, come on, a bit more effort wouldn’t have gone amiss, as he mutters self-consciously over a strident piano. On paper this should have been the high spot – I was chuffed as hell to see he’d done it, being my favorite song and all – but it falls so far short. Thankfully, with his reputation as a huge acolyte of Bowie needing a gloss over, this isn’t the last we’ll hear from Mac the Mouth.

I was a huge fan of Herman’s Hermits as a youngster, especially Noone, their cheeky-chappy frontman commonly perceived as the Herman of the group name. After the demise of the band, he embarked on a solo career, kicking off his lack of future success with an “Oh! You Pretty Things” cover, released ahead of Hunky Dory and suitably bowdlerized in lyric to appeal to the Saturday night TV variety show market that was envisaged as his demographic, spots on the Cilla Black show and the Lulu show, stuff like that. I’m sure I remember seeing this, sitting at home with my parents, the quality of the song cutting through the banality of the arrangement.

The first of the lesser known and more difficult songs to trace. I was grateful to learn of existence of Dolly Spectra, self-styled denizen of Zebra Square, and her cover of “Eight Line Poem.” Easy as it is to mock, isn’t this just the sort of nonsense that the much younger Bowie was spouting, when still just David Jones? It is certainly no worse than the original.

Of course, the one advantage of prepping this earlier is that I missed the opportunities to include this and this, shockers both and exemplars of the majority of this much-loved song’s covers, all with oodles too much of syrup and snake oil. In the end, I chose Keren Ann’s version of “Life on Mars?” for its relative simplicity and the strings taking away the ubiquity of the piano elsewhere. She’s a successful Israeli artist with an interesting back-catalog of solo and collaborative work, often outside the English language. One of her collaborators has been Guy Chambers, one-time member of World Party and co-writer of much of Robbie Williams material. (As an indulgence, please find also a link to a piece of cleverness that smacks more of chutzpah than of scientific thesis. Actually a good version too.)

Danny Wilson were an ’80s Scottish outfit, one-hit wonders really, mainly the front for singer and songwriter Gary Clark, now a writer for hire, with songs covered by acts as diverse as k.d. lang and various ex-Spice Girls. His version of “Kooks” manages to bring out more of the pathos hidden in this otherwise jolly music hall jaunt of a song, perhaps as the vocals are clearly those of a more world-weary traveler than the then youthful Bowie. I like to imagine this might be how a pre-Lazarus Bowie might have presented it.

I feel sorry for Seal, as, clearly a gifted vocalist, he has tended to have to largely rely on the songs of others for his supper. Sometimes he has ordered from menus chosen by accountants, with less taste than presentation; certainly of late, it’s been hard to remember quite what a force he can or could be. Mind you, I dare say his bank manager has no such worries. This live version of “Quicksand” stems from 20 years ago, enlivening one of Bowie’s arguably lesser songs.

Sure you knew it wasn’t a Bowie original….. Biff Rose, who wrote “Fill Your Heart,” is an American comedian and singer-songwriter who writes with a distinctively vaudevillian bent. His own version is just the sort of Anthony Newley stuff that so earlier appealed and was an influence on Bowie, and whom Bowie’s own take sounds like. Tiny Tim’s version is just barking mad, and I love it best of the three.

I think this was a hit. I certainly remember seeing Dana Gillespie on Top of the Pops, the fabled UK TV chartshow of my youth and early adulthood. This is taken fairly straight, the impact more through the appearance of Ms. Gillespie, a statuesque and striking amazon of a woman. She presumably was offered the gig following her backing vocals on “It Ain’t Easy,” with Bowie and Mick Ronson producing her 1973 album Weren’t Born a Man, from whence the single was lifted.

I failed completely on this, all my researches coming up only with this affectionate homage/pretentious drivel (delete as applicable). Turns out it’s a Stevie Riks cover, though I am uncertain if I wish to give him any credit for his karaoke aping that invests more in the video than the audio. It’s a shame, as “Song for Bob Dylan” is a quaint and heartfelt song, itself a tribute to Dylan’s own “Song to Woody.” Which in turn would beget Ian McCulloch, that man again, and his 2013 song “Me and David Bowie,” which, although not strictly a cover, deserves its place here.

There clearly had to be a Seu Jorge song here, his inimitable slew of Bowie covers being now more famous than the film from which they came, Wes Anderson’s The Life Aquatic with Steve Zisssou. Bowie himself felt Jorge gave his songs a “new level of beauty.” No self-respecting cover freak has not got the soundtrack sessions CD on their shelves. Jorge’s “Queen Bitch” is actually less idiosyncratic than many of his interpretations, being basically a thrash along in Portuguese. But is none the worse for that.

A ’90s US covers band with aspirations a tad above their station is how I might describe this band, their sole output being a 1995 album of all covers. I can’t improve on the Allmusic.com assessment: “not a total and utter trudge-fest, finding a weird balance between the relative exultance of the original, and the band’s own mock metal heroics, adding in a bit of woozy semi-shoegaze psychedelia at the end.” That’s for the whole LP but it neatly sums up their cover of “The Bewlay Brothers” too.

Hunky Dory is available from Amazon and from davidbowie.com.