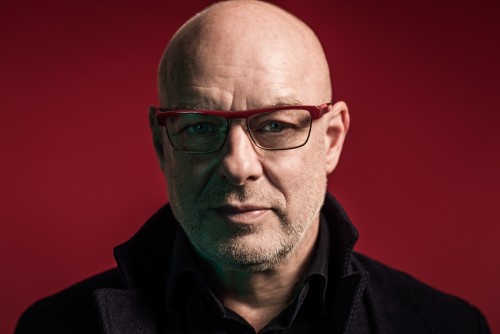 Brian Eno’s upcoming album The Ship has only two tracks, each over twenty minutes long. The second, “Fickle Sun,” is divided up into the three separate movements – and the third is actually a cover of the Velvet Underground’s “I’m Set Free.” A Serbian radio station has posted it as a part of a mix, so you can listen to it below.

With shimmering electronics and the occasional burst of orchestra, the cover is, for lack of a better term, Eno-esque. The choral vocals are beautiful (it’s unclear whether it is Eno himself singing) and it’s everything you might expect and hope for with Eno covering the Velvets.

Eno said in a statement when announcing the album:

On a musical level, I wanted to make a record of songs that didn’t rely on the normal underpinnings of rhythmic structure and chord progressions but which allowed voices to exist in their own space and time, like events in a landscape. I wanted to place sonic events in a free, open space…

Written in the late sixties, Lou Reed’s song ‘I’m Set Free’ seems even more relevant now than it did then. Perhaps anybody who’s read Yuval Noah Harari’s ‘Sapiens’ will recognise the quiet irony of “I’m set free to find a new illusion”… and its implication that when we step out of our story we don’t step into ‘the truth’ – whatever that might be – but into another story.”

Listen “I’m Set Free” in the mix below or at Mixcloud (which also has the track list). The song starts 56 minutes in – but be careful of overshooting – Mixcloud lets you skip forward, but not back.

Update 4/21: Eno has shared an official video, so you don’t need to skip around that mix any more. He also gave a longer statement about the song, below:

The first time I ever heard [The Velvet Underground] was on a John Peel radio show… it was when their first album came out and I thought “This I like! This I want to know about!”. I was having a huge crisis at the time. Am I going to be a painter or am I somehow going to get into music. And I couldn’t play anything so music was the less obvious choice. Then, when I heard The Velvet Underground I thought, “you can do both actually”. It was a big moment for me.

That particular song always resonated with me but it took about 25 years before I thought about the lyrics. “I’m set free, to find a new illusion”. Wow. That’s saying we don’t go from an illusion to reality (the western idea of “Finding The Truth”) but rather we go from one workable solution to another more workable solution.

Subsequently I think we aren’t able and actually don’t particularly care about the truth, whatever that might be. What we care about is having intellectual tools and inventions that work. [Yuval Noah Harari in his book Sapiens] discusses that what makes large-scale human societies capable of cohering and co-operating is the stories they share together. Democracy is a story, religion is a story, money is a story. This chimed well with “I’m set free to find a new illusion”. It seems to me what we don’t need now is people that come out waving their hands and claiming they know the Right Way.