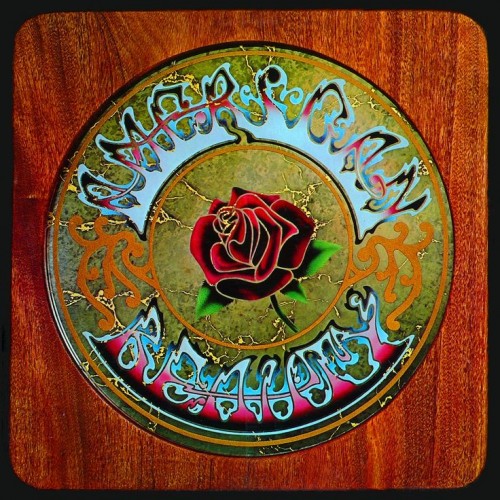 American Beauty, along with its predecessor Workingman’s Dead, was changing rock and roll. The Dead’s fusion of rock, folk, bluegrass, and country was creating an exciting new sound that had traditionalists scratching their heads and music lovers dancing in the streets. One episode of Freaks and Geeks featured a character named Deadhead Laurie, and she put it perfectly: “I wish I never heard (American Beauty) just so I could hear it again for the first time.”

Thanks to the singer-songwriter icon Robert Hunter, the lyrics are pure folk poetry. The melodies and newly featured lush harmonies (learned from studio-mates Crosby, Nash, and Young) are precise and crisp. And the lead vocals are the essence of raw honey, with Jerry Garcia singing six of the ten songs. As far as the remaining four, the whole band partakes in a group harmony in “Attics of My Life,” Pigpen politely asks for assistance on “Operator,” Bobby enthusiastically tackles “Sugar Magnolia,” and  Phil sings “Box of Rain,” beautifully.

Hard copies of American Beauty are usually worn out and mangled, due to excessive listening. The all-time classic is an embarrassment of riches, chock-full of scripture-esque tracks, and is still recruiting new generations of Deadheads to this day. It’s beautiful, joyous, sad, reflective, and inspiring. American Beauty dominated the summer and fall of 1970 and remains loved and revered nearly half a century later. These ten covers of its songs prove it – some hold the originals in awe, some forge their own special path, and all of them are very much alive.

It’s impossible to imagine anyone other than Phil Lesh singing the beautiful “Box of Rain,” a song whose beauty gets magnified when you learn that Phil wrote it to his dying father. In this live version, Amy Helm, daughter of the great Levon Helm, with her band, the American Beauty Project, gets behind the piano and makes Phil proud as she belts out this gorgeous Dead staple with supreme honky-tonk confidence.

Ministry covering The Grateful Dead?! Sure, why not? This live version, taken from The Bridge School Concerts, Volume 1, is proof that the even one of the godfathers of industrial metal, Al Jourgensen, isn’t immune to the universal appeal and magic vibrations of the Grateful Dead. This cover is fast but not rushed. Al savors “Friend of the Devil” with some shockingly fantastic folky chops.

Originally a member of Jefferson Airplane (studio-mates of the Dead during the making of American Beauty) and now a prominent and thriving figure in the bluegrass community, Jorma Kaukonen brings his teflon cool persona and takes on the wonky and hooky “Operator” and transforms it into a soulful bluegrass hootenanny.

In this live cover version from the Fillmore, Keller Williams and friends have a good ol’ time feverishly pickin’ and grinnin’ this originally harmony drenched, slow-tempo’d classic about “Candyman,” an anything but sweet, dark, mysterious character. The result is a Fillmore crowd whipped into a bluegrass frenzy.

At the young age of 34, Sarah Watkins is a living bluegrass legend. Brother Sean Watkins, Fiona Apple, and the rest of the Watkins Family Hour band members are all tremendous musicians, and their additions to this cover are massive. But it’s Sarah’s voice, passion, and supreme talents that makes the Watkins Family Hour’s cover of “Brokedown Palace” second only to the Dead’s.

Pickin’ On Series – Till the Morning Comes (Grateful Dead cover)

The Pickin’ On… boys have a rich and extensive catalog of the wide ranging bands these brutes have “picked on.” With the bands ranging from Metallica to Elton John, the Pickin’ On… boys found it in their hearts to kindly deliver us a smokin’ bluegrass version of the Dead’s rambunctious “Till the Morning Comes.”

The most reflective and lyrically rich song on American Beauty was originally presented to us as a full band harmony, which was glorious and perfect. This cover gives us Keller Williams and a piano. This isn’t the one-man-band, looping-maniac Keller you may be accustomed to. This Keller gives us a simple and heartfelt cover of “Attics of My Life” that comes from a place that only a song of this magnitude and beauty can help one inhabit.

We’re going the end with a live cover version of “Truckin'” from “the live psychobilly voodoo chambers of the Appalachian Mountains,” compliments of the great Dwight Yoakam. Dwight and his exemplary back-up band shred through the Dead’s arguably best-known song like they’re getting ready for a bar fight.

For anything and everything Dead, go to their website. You can buy American Beauty on vinyl here. Discover 317 other covers of Grateful Dead songs on SecondHandSongs.