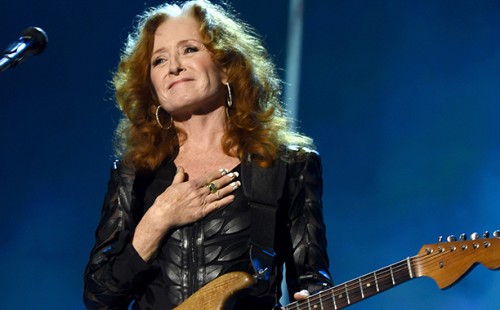 It seemed like you couldn’t get away from Bonnie Raitt in the ’90s.  It all started with her Grammy Award-winning album, Nick of Time.  That led to a few more platinum albums, Top 40 hits on the Pop, Rock and Adult Contemporary charts, a few more Grammy Awards as well as an and an induction into the Rock and Roll Hall of Fame.

And then she just kind of disappeared.

During this time, which she calls “a dark night of the soul”, her mom and dad both passed away within a year of each other.  Not long after, her brother and best friend both lost their battles to cancer. “I had a rough time there for a few years with loss and pain,” she said. “I was drained.”

Bonnie came back in 2012 with a new album: Slipstream.  It was praised by critics and fans alike.  It was the best-selling Blues album of the year and earned her yet another Grammy Award.  Finally, she was back on track. And then, again, nothing.

Until now. Last month, she released her seventeenth studio album, Dig in Deep.  The album contains five songs written by Raitt as well as a cover of “Need You Tonight” by Aussie band INXS. Bonnie takes this pop hit and “blueses” (is that a word?) it up the way she knows how. Listen below.