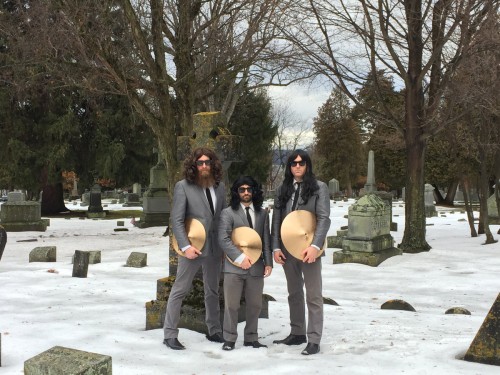 Despite being hundreds of miles from any ocean, Burlington, Vermont has a plethora of surf-rock bands. Competition within the snow-surf scene must be fierce, and one band has taken on a novel side gig: covering Black Sabbath songs. The Ventures never quite got around to covering Ozzy and co, but the “Surf Sabbath” project shows that maybe they should have.

“Surf Sabbath came about from just simply having a passion for Black Sabbath and metal music in general,” guitarist Matt Hagen tells us. “It seemed to make sense once you recognize the similarities between surf guitar and metal guitar. Both have that fast/tremolo picking style guitar work.”

The songs work way better than you’d expect, perhaps due to judicious song selection. Surf Sabbath (otherwise known as The High Breaks in their main gig) pick covers from across Sabbath’s first half dozen albums, from hits like “Paranoid” to b-sides like “Wicked World.” They even do a mashup of the surf-rock classic “Penetration” with Sabbath’s “Sweet Leaf.” They mostly avoid obvious songs like “War Pigs” and “Iron Man” – perhaps because those songs would be terrible as surf rock (you can hear five non-surf “War Pigs” covers here though).

“Choosing what Sabbath songs to arrange just took picking out what melodies and hooks stood out the most,” says Hagen, “recognizing groovy riffs and Ozzy’s vocal leads. Some like, ‘Symptom of the Universe’ hardly needed any rearranging. I had simply never heard anyone do this before.”

Download the eight Surf Sabbath covers for free below.