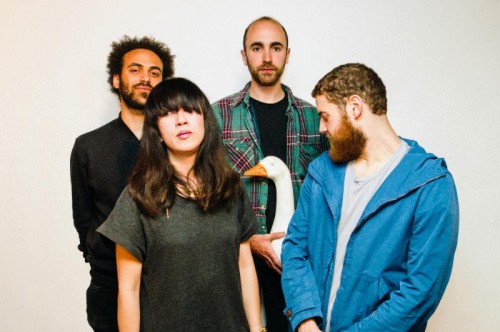 It’s hard to say how responsible Yuck‘s excellent 2011 self-titled debut was in launching this decade’s ongoing ’90s revival, but songs like “Get Away” and “Georgia” were compelling reasons to trade in your turntables for guitars and revisit Clinton-era rock music. Five years later and on the eve of their third album, Stranger Things (February 26th via Mamé Records), the London-based punk band is still going strong by taking everything that was great about ’90s guitar rock – J Mascis’ fuzz pedal, Stephen Malkmus’ sunny melodies, and Kevin Shields’ blissful use of noise – and finding new avenues to make their own way through alternative music’s ever-changing landscape.

So when Yuck released a cover of Fugazi‘s classic anthem “Cashout,” it was a faithful tribute and not a rip off. For a band known for using a lot of fuzz a few effects, Yuck’s clean tones and tight drums might catch some fans off guard, but the essence of the song remains and so does its political message.

This is what vocalist and guitarist Max Bloom had to say about choosing to cover this particular Fugazi track in a press release: “The whole record [2001’s The Argument] is fantastic, but this song in particular stands out for me mainly because of its lyrics and how relevant it still feels more than a decade on. I’m not sure exactly what inspired Fugazi to make this song, but I imagine I share the same anger and frustration as they do.”