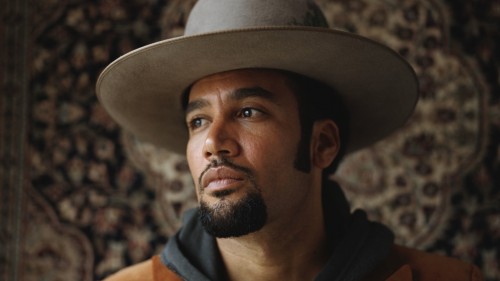 Ben Harper is the kind of artist who’s all too easy to miss. He’s not particularly flashy. He doesn’t make headlines for terrible behavior. In fact, he does the opposite: he’s involved in several charities supporting conservation, scholarship, and feeding the hungry. These are wonderful qualities for a human being and an artist to have, but they don’t necessarily help that artist stay in the public eye. What Harper also does, however, is bring his own brand of American music to fans around the world. During his career, he’s experimented with rock, folk, gospel, blues, country, reggae, and jazz, and proved himself equally adept at them all. He’s consistently delivered quality music for over two decades. It may be easy to miss him, but once discovered, he’s impossible to forget.

Harper grew up around music. Raised by his mother after his parents’ divorce, he spent a great deal of time in his grandparents’ folk music store, which would be frequented by musicians like Leonard Cohen and Taj Mahal. Such a setting naturally led to Harper picking up the guitar, and by his late teens he was playing slide guitar, the instrument which would help make him famous. He was invited to play on Taj Mahal’s 1990 album Follow the Drinking Gourd, and his fate as a professional musician was sealed.

Harper’s debut album, Welcome to the Cruel World, was released in 1994. It was followed the next year by Fight for Your Mind, which quickly became a favorite as he gained recognition touring with acts like the Dave Matthews Band. He would continue to tour and release music through the ’90s with his backing band, the Innocent Criminals, but the next step in his evolution would come with the release of Diamonds on the Inside in 2003. With its blend of blues rock and spirituality, Harper found a way to push into new territory.

Diamonds enjoyed success in the States, but that was nothing compared to its popularity overseas. His Australian tour for the record did very well, and in Europe, Harper found himself voted Artist of the Year for the French edition of Rolling Stone. Following in line with the religious themes present in Diamonds, Harper would release a gospel album featuring The Blind Boys of Alabama in 2004 titled There Will Be a Light, proving that he was much more interested in following his muse than in pursuing fame for its own sake.

Two years later, Ben would release the double album Both Sides of the Gun, marking a change in his music. For the first time, he played most of the instruments on the album himself; his longtime band, the Innocent Criminals, would appear on a few tracks, but his new band, Relentless7, would also appear on the final track of the album, bridging a gap between his earlier and later music. The Innocent Criminals would back him again on his next album, Lifeline, in 2007. 2009 marked Harper’s first full album with Relentless7, White Lies for Dark Times. That album would find Harper and his new band delivering a harder rock sound than most of his previous music.

2013 found Harper releasing an album with blues musician Charlie Musselwhite. Get Up! showcased another facet of Harper’s musical personality, showing that his folk rock could accommodate Musselwhite’s harmonica as if belonged there all along. One year later, Harper would record a duet album with his mother, Ellen. Titled Childhood Home, it would showcase the love of music present in Harper’s family all along, hearkening back to those childhood days spent in his grandparents’ music store. Having come full circle with what is still his most recent release, Ben Harper stands tall in roots music. He’s never been on top of the musical world, but he’s always present; with ties to folk, gospel, rock, blues, country, and Americana, he could hardly be otherwise.

Over the more than twenty years that Harper has performed and released music, he’s delivered some great covers. Here are some of his best.

There’s a lot to be said for putting your own spin on a cover song, but sometimes the wisest course of action is to just let the tune be. Harper and his second backing band, realizing that Queen and David Bowie probably knew exactly what was best for this song, do that here. He turns in an understated vocal take, giving it the same falsetto croon present in so many of his own tracks. Instead of changing much, Harper shows that “Under Pressure” is a song that’s solidly within his own wheelhouse from the start. The subject matter is also something the socially conscious Harper is obviously drawn to in so much of his own original music. It’s easy to see why he was drawn to perform the song, with its message of the stresses placed on us by our uncaring world.

Ben gave us this Temptations cover on the documentary Standing in the Shadows of Motown, which was about the Funk Brothers. Harper’s take featured the remaining members of the tremendously talented backing group. His expressive delivery wouldn’t have been at all out of place in Detroit’s classic soul sound; he’s able to deliver those same growls and high notes that the best of Motown always gave us. It’s an amazing thing when someone with such instrumental gifts is able to deliver with their voice, as well.

Ben Harper and Jennifer Nettles take the Boss’s classic from Born in the U.S.A. and make it into a fine duet. This performance from the Kennedy Center Honors met with approval from Bruce, and why wouldn’t it? Their voices blend as if they were made for this; her husky voice provides an interesting counterpoint to Harper’s natural croon. By the time they’re telling each other that they’re each waking up with sheets soaking wet, it’s clear that this isn’t quite the desperate, unrequited need of the original version, but a love song that’s always been waiting to happen.

Ben Harper’s voice seems to have been made from love songs. His high voice and way of holding on to a note have a way of expressing emotion that many other vocalists can’t match. The intensity needed for a song like Marvin Gaye‘s “Sexual Healing” comes naturally to him. It’s a perfect song for Harper; the same longing he shows in his cover of “I’m on Fire” is present here, but in a much more playful way. In that duet, he was waiting for a relationship to start. In this cover, it’s well underway and the need is still there, but he knows what’s going to come when he gets together with the object of his affection.

Any list of Ben Harper performances would feel incomplete without a song with such a heavy focus on his signature slide guitar. He performs the Zeppelin classic here with Charlie Musselwhite on harmonica, with whom he recorded Get Up!. The dirty, bluesy feel of this performance is a great counterpoint to the light touch present in some of the other covers Harper has performed. It’s necessary to get down and dirty from time to time, and Ben does just that here, driving his way through the song with his Weissenborn while he wisely delivers a vocal performance that’s not a copy of Robert Plant‘s. Sometimes a little bit of grime is a good thing, and Harper gives that here.

You can visit Ben Harper’s website here. You can also check out his music on Amazon.