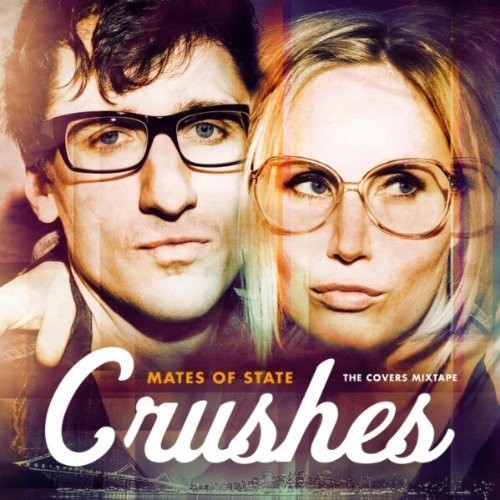 On Crushes, the husband-wife indiepop duo of Kori Gardner and Jason Hammel draw their song selections equally from indie hits of the past decade and classic singer-songwriters. But they are beholden to neither group. Americana laments become dance celebrations. Outsider indie-prog becomes glossy toy-store pop. Electronic beats and gorgeous harmonies coexist in worlds far different than the ones the original artists envisioned.

Perhaps the most out-there example is “Long Way Home.” If you know Tom Waits’ beautiful acoustic ballad, hearing a version that opens with power chords and a chorus of chipper “Yeah yeah yeah!”s might initially put you off. It might even outrage you if you really love the original. And I understand the initial shock; Lord knows I never expected to want to fist-pump to a Waits “grand weeper” (to borrow his wife’s phrase). But, because they don’t try to broker some compromise to appease Tom Waits fans, it works. They unapologetically throw the original template in the garbage, and the cover is better for it.

This pattern holds throughout the album. Daniel Johnston’s oft-covered “True Love Will Find You in the End” bounces along a thudding dance beat – with a ukulele break to boot. Vashti Bunyan’s “17 Pink Sugar Elephants” gets a child’s vocals added, and shockingly it’s not irritating. On the indie-rock side, Girls’ “Laura” adds in the sounds of a DJ scratching, and “Sleep the Clock Around” boosts the horn line so it would work if Belle & Sebastian ever start playing arenas.

Mates of State – Sleep the Clock Around (Belle & Sebastian cover)

But Crushes is not simply take-quiet-song-and-make-loud, then repeat. Nick Cave and the Bad Seed’s tender ballad “Love Letter” is still a tender ballad here. But Gardner and Hammel swap the strings and piano for synthesizer swirls and a one-woman choir of Gardner’s layered voices. And on the opposite end of the tempo spectrum, Mates of State’s “Second Hand News” is every bit as upbeat and catchy as Fleetwood Mac‘s version – only now it’s got skittering electronic production and not a Lindsey Buckingham-guitar in sight.

When mosts artists record cover albums, they arrange the songs to appeal not only to their own fans, but fans of the artists being covered as well. Which is understandable from a marketing perspective – if you go the work of recording a Bob Dylan tribute album, you hope some Bob Dylan fans will buy it. But Mates of State’s Crushes succeeds by not caring about that at all. The deeper your emotional attachment to Tom Waits or Girls goes, the more likely you are to be appalled. But the open-minded fan will find a lot to love in these new, radically different versions.

And that is, in the end, the best tribute to a songwriter, showing how their songs hold up even when ripped apart and reinvented. Mates of State don’t tiptoe that fine line of reverence. They – pardon the pun – crush it.

Buy ‘Crushes (The Covers Mixtape)’ on Amazon and find more Mates of State at their website.