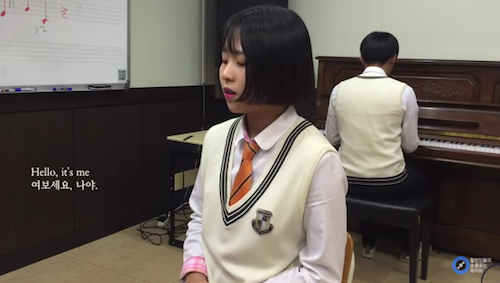 In retrospect, it feels like it was only a matter of time before an Adele cover launched a talented young person to viral mega-sensation status – and that time has come. While Adele is always eminently coverable, “Hello” has been a blend of hype machine and vocal power showcase since before it was even released, and it seems a student from Seoul Music High School in Korea has covered just the right song at just the right moment to ride that wave into her own spotlight.

But it’s not just that, not just a matter of being at the right place at the right time, so to speak. Yes, this cover hit YouTube as the song’s reception and popularity were continuing to swell, but the fact of the matter is that the track is utterly stunning. Numerous commenters across the Internet have attested to thinking the singer was lip-syncing at first, and it’s easy to see why – this is one of those covers that gives the original a run for its money. And when it’s a cover of one of the most talented and powerful singers in the world, that’s saying something. Enjoy.

Check out more from Seoul Music High School on YouTube.