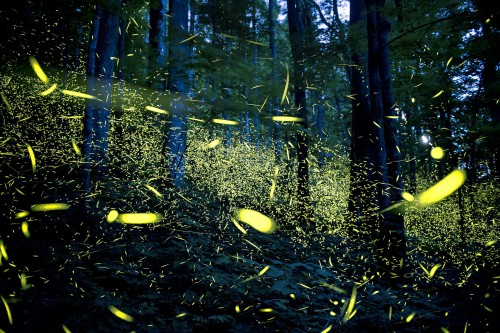 These days the Magnetic Fields, Stephin Merritt’s means of distribution for some of the cleverest old-school songwriting around, is arguably best known for the 69 Love Songs box set (if you don’t yet have it, there are half a dozen songs on it you’ll fall in love with), but they’ve come up with winners right from the start. “100,000 Fireflies” was their first single on their first album, Distant Plastic Trees, back when Merritt was letting Susan Anway handle all the vocals and he handled all the instruments. Anway sings of shrieking and suicide, over a simple backing just this side of rinky-dink, but what comes across is a devastating lilt of loneliness, made all the more painful by its catchiness.

“100,000 Fireflies” was a grower, passed along by word of mouth and from heart to heart, haunting thousands upon thousands of Maxell mix tapes. Today, over a quarter century after Merritt wrote it, it’s a confirmed classic, with scads of cover versions to prove it. Five of them can be heard below.

Superchunk can take credit for introducing the Magnetic Fields to much of the world – not only did they sign them to their record label Merge, they also covered “100,000 Fireflies” in their trademark big-loud-racket way. Their built-in fan base took a shine to the song, and Merritt & co. were on their way.

From the tribute album 21 Love Songs come the Secret Owl Society’s take on “100,000 Fireflies,” also using synthesized instruments to preserve the simplicity of the original’s backing. However, it changes the melody completely, making it a whole new song in more ways than one.

Our Lady of the Highway – 100,000 Fireflies (The Magnetic Fields cover)

Once upon a time there was a website called Meaningless, which curated any number of Magnetic Fields covers by bands unknown and even more unknown (though with names like the Guantanamo Bay City Rollers, that shouldn’t have been the case). Sadly, it seems to have bit the virtual dust, but at least one survivor has surfaced – this cover of “100,000 Fireflies” by Our Lady of the Highway, which recalls Jad Fair in its strident warmth.

“If you want to dream of days with blue skies and love in your heart, this band is for you,” an iTunes listener says about the Magic Whispers. Indeed, they share the Magnetic Fields’ ramshackle homespun charm, and of these five covers of “100,000 Fireflies,” this one may have the most in common with the original.

Suddenly, Tammy! was one of the ’90s Next Big Thing bands; when their day ended, Beth Sorrentino, the band’s singer/pianist, kept going, as a music teacher in New York City and as a recording artist who’s doing work even more meaningful than in her major label days. Her 2011 album Hiding Out features covers ranging from Kate Bush to the Zombies; “100,000 Fireflies” is just one of its many highlights.

One Response to “Five Good Covers: 100,000 Fireflies (The Magnetic Fields)”