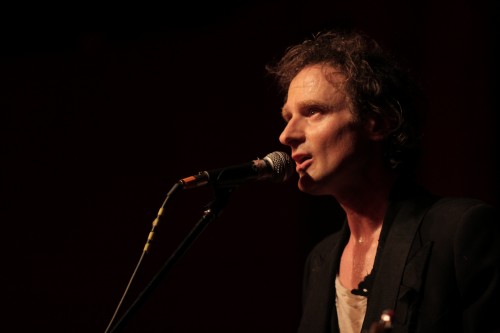 Ethan Gold’s got smarts – he graduated magna cum laude from Harvard. Ethan Gold’s got genes – his father Herbert is a novelist, and his twin brother Ari is a student-Oscar-winning director who plays ukulele in their band, the Gold Brothers. Ethan Gold’s got serious music credentials – aside from scoring his brother’s films, he’s released 2011’s Songs from a Toxic Apartment (Gold’s residence had enough mold and asbestos that when the Department of Public Health condemned it, he needed a gas mask to get his possessions), which won high praise from Pitchfork and others, and his new album Beings features fan favorite “Our Love is Beautiful.”

And Ethan Gold’s got a bedroom closet, where he sometimes goes to record some amazing covers.

Gold’s got the one man band thing down cold, building instrumental loops one by one and then singing over them all, not just recalling the originals, but bringing them to life. When he sings “Won’t you breathe with me?” in his uncanny recreation of “Born Under Punches,” the first track on the Talking Heads classic Remain in Light, it’s as though he’s talking to the song, and the song is certainly saying yes.

The covers serve not only as an exhibition of Gold’s playing and production skills, but also as a way for him to pay tribute to those bands and songs that have meant the most to him. About his cover of “Gut Feeling” by Devo, he says, “I loved this band when I was 8 and still am in awe of this stuff.” Not so in awe that he can’t capture the original’s headlong excitement.

Of course, one doesn’t need a heap o’ gizmos to make a great closet cover – the old schoolers can do the job with a mere acoustic and harmonica. Lucky for us, so can Gold. Here he reimagines “Bela Lugosi’s Dead” by the Bauhaus as a downcast folk ballad, and the song becomes something else again as an unplugged ode to the undead.

Ethan Gold has a YouTube page featuring more of his music, including the complete Bedroom Closet Cover collection. Learn more about him at his website.

3 Responses to “On the ‘Tube: Ethan Gold”