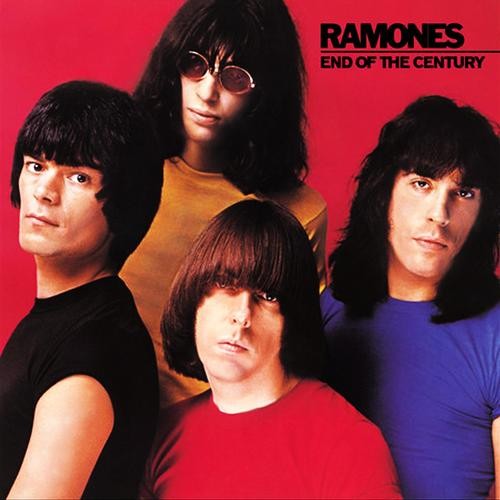 But his perfectionist technique clashed with their one-and-done standards, and his bringing guns to the studio didn’t assure anybody. The sound pulled the Ramones further away from their punk roots, and their songs were weaker (Dee Dee: “Some of the worst crap I ever wrote went on that album”). They’d been reduced to writing sequels to songs on their debut, a sure sign the well had started running dry. When End of the Century was released in February 1980, punk fans the world over learned the sad truth; the Ramones that had left home on a rocket to Russia had come back to earth and landed on a road to ruin. They would spend the rest of their existence as an uneasy combination of working musicians and rock icons, with their days of breaking new ground forever behind them.

One could argue that Spector did the job he was hired to do; after all, End of the Century got into the top 50 worldwide, and the best songs on it did have their own vital spark that he’d boosted instead of smothered. But that was the trouble as well – their own vital spark meant that it wasn’t a Ramones spark. The band that performed here were RINOs (Ramones In Name Only), and the greatest winning streak in punk album history was over.

Finding covers of all twelve songs was a herculean task, but we went through the Augean stables and found a dozen that suited our purpose.

Spector got the chance to put his all into “Do You Remember Rock ‘n’ Roll Radio?”, a song that was literally built on nostalgia. What the Airborne Toxic Event do with it may be the most exhilarating thing you hear all day. The indie quintet joins forces with the Calder Quartet and a batch of brass & percussion on All I Ever Wanted: Live from Walt Disney Concert Hall, and together they absolutely SMOKE this song. Oh, to have been in the audience for this one.

On her Soundcloud page, Emy Horsell calls her cover of “I’m Affected” a “[s]habby torch song-esque cover,” adding, “No Spector Wall of Sound here… just hands dragged over ivories and vocal cords dragged over lyrics. Gin and tobacco fumes optional.” Her humor and honesty informs this performance with a very knowing wink.

All Good Cretins Go to Heaven is another Ramones tribute album filled with the work of various European bands. Most of them are from Germany, but the compilers managed to land a Swedish band named Waver. Sounding like a more emotional Aimee Mann, they remake “Danny Says” with undisguised devotion, turning what was already one of the Ramones’ best ballads into a high point of the tribute.

Dee Dee wrote “Chinese Rock” years before End of the Century; the band was reluctant to record transparently drug-related songs, so Dee Dee passed it on to Johnny Thunders and the Heartbreakers, who recorded it (as “Chinese Rocks”) on their L.A.M.F. album. Eventually the other Ramones overcame their reluctance and put their own stamp on it. So did the Nutley Brass, on their album Ramones Songbook as Played by the Nutley Brass. In their case, they might as well have borrowed their stamp from Wes Anderson.

Tom Waits – The Return of Jackie and Judy (The Ramones cover)

Leave it to Tom Waits to bring his ultra-cacophonic sound to a Ramones song and turn it into an entirely different kind of monster altogether. In his hands, “The Return of Jackie and Judy” picks up a lumbering swing, sounding like it grew about a foot and a half and is on the lookout for dark alleys to trundle on down.

The Stupids, a UK-based band, collaborated with the Hard-Ons from Australia to create 1988’s No Cheese! The High-Way to Hell Tour Souvenir, an eight-song EP. The Stupids have all of side A, and close it with their cover of “Let’s Go,” in much the same way that the Ramones used it to close the first side of End of the Century. Really, there’s not a lot more you can say about either the original or the cover here.

“I didn’t play on that at all,” said Johnny about “Baby I Love You.” “What am I gonna do – play along with an orchestra? There’s no point.” Indeed, no Ramones played instruments on this cover of the Ronettes‘ classic, and Joey would later admit to being uncomfortable about being singled out for special treatment by Spector. But he put everything into his vocal, and the song became their only top ten British hit. The Cat’s Miaow cover here is more a Pillow of Sound than a Wall, but don’t hold that against it.

Do they teach Ramones in high schools in Sweden? Is there something in the water? Over and over again, the land of Abba, Volvo, and meatballs has come up with above-average covers of Ramones songs. Here’s another one, from Wilmer X, taken from the tribute album The Song Ramones the Same, which was released on the first anniversary of Joey’s passing and dedicated to him.

The second half of End of the Century saw the band struggling to put up material worthy of the previous four albums, and not always succeeding. This Full Album cover set will reflect that difficulty, starting with this instrumental cover of “This Ain’t Havana” by Brunno Mendes, a Brazilian who’s recorded multiple Ramones guitar covers. You can find them here if you’re so inclined.

There are a number of covers of “Rock ‘n’ Roll High School” out there, but it seemed right to give P.J. Soles the spotlight here. After all, as Riff Randall, rock ‘n’ roller, she gave the movie Rock ‘n’ Roll High School a tremendous amount of bounce, and she’ll be forever synonymous with the cult favorite that served as punk rock’s very own Hard Day’s Night. One listen to her performance for the movie’s soundtrack, and you’ll know her laugh at the end is genuine.

The Rabinos – All the Way (The Ramones cover)

Another instrumental cover of another second-rate Ramones song, “All the Way” is performed here by the Rabinos, which is Spanish for the Rabbis. They’re another band that specializes in guitar covers of the more obscure Ramones songs.

“High Risk Insurance” proved to be one of the most difficult songs to find a cover of, and once again, there was a band that saved the day by covering the album in its entirety. In this case, Boris the Sprinkler recorded a beginning-to-end take on End of the Century, so their cover of “High Risk Insurance” served as a closer both for them and for us.

‘End of the Century’ can be found on Amazon.

5 Responses to “Full Albums: The Ramones’ ‘End of the Century’”