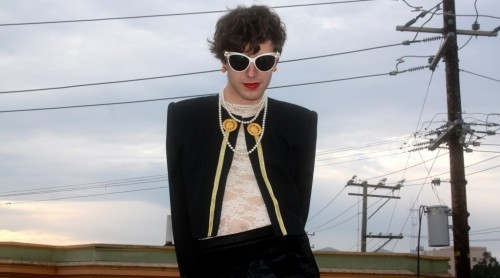 A few years back, Ezra Furman dumped his band the Harpoons to go solo. Anyone familiar with the Ezra Furman and the Harpoons records – and you should be, Mysterious Power is one of the best rock and roll records of the decade – would have a hard time thinking they were holding him bach. They were pretty all over the place sonically, after all. But perhaps they were, as his latest album Perpetural Motion swings about even more wildly. Twisted doo-wop, lo-fi garage, twirly synth-pop, brash soul: the style changes from one song to the next, following his restless interests. And clearly he’s stayed restless, as he now has a five-song bonus EP too, a covers set available when you purchase the album at Rough Trade.

Two of the covers have hit the Internet and – big surprise – they sound nothing alike. His take on Arcade Fire’s Funeral favorite “Crown of Love” is a big lighters-up power ballad, complete with prominent saxophone. His cover of LCD Soundsystem’s “I Can Change,” on the other hand, is a plaintive acoustic number. Listen to both below.

To get the full EP, buy ‘Perpetual Motion’ at Rough Trade.