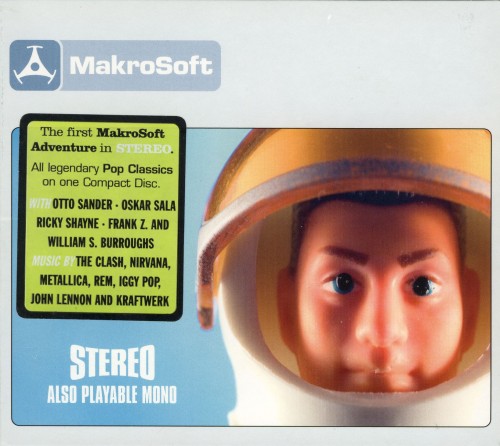 One of the perks of writing for Cover Me is the degree to which it gives you the chance to make discoveries. For instance, I was searching for some good Clash covers (more on why in a minute) and it led to find the 2006 album Stereo Also Playable Mono by MakroSoft. After listening to a few tracks, I got the impression that John Barry, Lalo Schifrin, and Ennio Morricone had gotten together, in a laboratory sponsored by Kraftwerk, and created film scores based on some of the immortal songs of the previous half century.

Further investigation reveals that MakroSoft is actually Rüdiger Esch (former bassist for Die Krupps), Trini Trimpop (former drummer for Die Toten Hosen) and studio veteran Juergen Hahn. These three Germans got together with the occasional special guest for vocals, trombone, what have you, and created an album with twelve covers of artists ranging from John Lennon to Soundgarden, topped off with four instrumentals of their own. “Epic” would not be an unfair description – if you’re familiar with the soundtracks of ’60s spy thrillers, and how the music could overwhelm in a pleasurable way, you’ll have a good idea what MakroSoft does with their covers. If you’re not, prepare yourself to be overwhelmed in a pleasurable way.

Yes, it’s another cover of Nirvana’s breakthrough smash – but now it seems like something that would play during the closing credits of a new Bond-wannabe action flick. Paring out the lyrics to all the verses makes “Smells Like Teen Spirit” that much more sinuous and slinky, and the music has had all the grunge wiped away, giving it an unsettling sheen.

Ricky Shayne, half-Lebanese, half-Egyptian, sounds all Welsh here, channeling Tom Jones’s oversized voice and persona for this cover of “I Will Survive.” If Gloria Gaynor sounded like she was gaining more and more self-confidence as she sang, Shayne sounds like he’s gaining the confidence of an entire town, and the epic backing track serves to magnify that confidence.

Today would be Joe Strummer’s sixtieth birthday were he still alive. We celebrate him here with one of the greatest side one track ones ever, “London Calling,” as vocalized by one Barbara Cuesta. Her delivery is far less menacing than Strummer’s; she sounds more lost in the background than leading an army of listeners. But the song doesn’t suffer for that; no, it’s got a whole new kind of uplift here, just as valid and just as monumental.

Like the original before it, MakroSoft’s cover of “Enter Sandman” knows how to make an entrance, with brass and bass making the sound that much bigger. Then they deploy a quote from the Peter Gunn theme. Show’s over.

If Sergio Leone were alive today, he would be making a movie called Once Upon a Time in Athens strictly for the opportunity to use MakroSoft’s huge cover of “Losing My Religion.” The harmonica evokes his soundtracks immediately; the use of guitar in the bridge clinches the deal. If there are two kinds of people in this world – those with loaded guns and those who dig – we dig, and we’re sure Messrs. Berry, Buck, Mills, and Stipe would dig this version too.