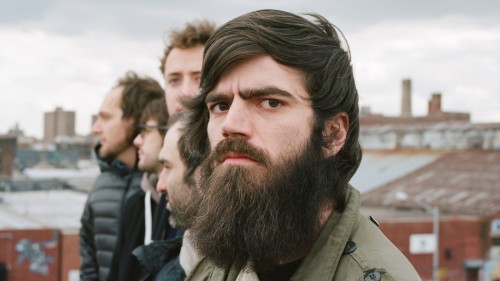 Titus Andronicus‘s highly-anticipated new double album The Most Lamentable Tragedy clocks in at 29 songs. Amidst killer singles like “Dimed Out” and “Fatal Flow” are 10-minute epics, short hardcore blasts, and a pair of covers: the Pogues‘ “A Pair of Brown Eyes” and Daniel Johnston‘s “I Had Lost My Mind” (they also riff on this one on original track “I Lost My Mind (+@)”. Now you can hear both covers.

Originally an acoustic song from 1982, the Johnston tune gets amped up a good deal. The Pogues 1985 song gets an even more dramatic reinvention though, ditching the accordion and brogue (and changing a few lyrics) in favor of a blistering guitar rager. It also seems they’ve buried the hatchet since 2011, when frontman Patrick Stickles complained to Spinner about the Pogues being rude when they toured together. “It made me furious,” he said. “I didn’t think that we were treated at all with the respect that we deserved, not even the respect as saying ‘we’re an important punk band’, but respect that we’re human beings.”

Listen to both below, and the whole album at NPR.

‘The Most Lamentable Tragedy’ comes out July 31. Preorder at their website.