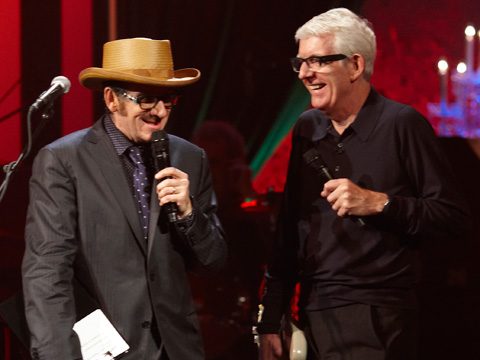 Brinsley Schwarz’s version is a Byrds-esque bit of nostalgic folk rock. Lowe wrote it in 1973, when the hippie era of peace and love was being supplanted by harder edges, harder drugs, alcohol and cynicism. As Lowe has said, “this song was supposed to be an old hippie, laughed at by the new thinking, saying to these new smarty-pants types, ‘Look, you think you got it all going on. You can laugh at me, but all I’m saying is ‘What’s so funny about peace, love, and understanding?’” It is, in that version, a perfectly fine song. But it took a fan of the Brinsleys, who would one day rename himself Elvis Costello, to turn the song into something more. Lowe acknowledged that Costello “brought it to the world, so to speak. Because when he recorded it, he gave it that anthemic quality which everyone reacted really well to.”

In fact, Lowe produced Costello’s version, and for some reason, it was initially released as the B-side to Lowe’s single “American Squirm,” credited not to Costello, but to “Nick Lowe and His Sound,” although Lowe did not appear on the track. It became a hit, and was added to the U.S. version of Costello’s Armed Forces album. Not only was it a powerful blast of sound, but its message was transformed into a cautionary tale for the Cold War divided world. No longer was the song a wistful look at an innocent past; instead, it became an angry lecture to those who seemed to want to risk the future. In 2004, Rolling Stone magazine ranked this version of the song as the 284th best song of all time. Remarkably, its title has become part of the language — it was referenced in Cameron Crowe’s Singles, is often appropriated for political headlines, and has been cited by the Federal Trade Commission.

In 1992, a cover of the song by Curtis Stigers appeared on the soundtrack of the Whitney Houston movie, The Bodyguard, and the album sold gazillions of copies and won a Grammy. That pretty pedestrian version thus earned Lowe a bunch of money, which Lowe claims he used to support a full band tour, although others claim that he socked it away. Either way, this version exposed “Peace, Love and Understanding” to a new audience. As a result, it is a much covered song. For the most part, it is either covered in the Costello style, or in a more folky style that owes more to the Brinsley Schwarz version, whether or not the artist ever heard that version. Some covers highlight the angry political edge that Elvis added, while others tend to be more pensive. And others are simply strange. There’s a Spanish language teen-pop version from Mexico. And Lowe and Costello have played it together.

Let’s take a look at a variety of approaches to covering this great song, ignoring for now, the other times that we at Cover Me have posted covers. At the end, you should be entertained, but you will, more than likely, still agree that Elvis’ version is the King.

Following the start of the Iraq War in 2003, many on the left hoped that Democratic candidate John Kerry could beat President George W. Bush. Bruce Springsteen, a regular on the liberal message concert circuit, participated in a series of ostensibly non-partisan (but actually pro-Kerry/anti-Bush) concerts in advance of the 2004 election. The Vote for Change tour included many artists, most of whom played only a few of the dates. The final show, on October 13, 2004, was at the soon-to-be-demolished indoor arena at the New Jersey Meadowlands, and was – of course – headlined by the Boss. He performed a muscular version of the song which he had performed at other dates on the tour with varying guest performers, this time with Jackson Browne, Eddie Vedder and John Fogerty joining in. The concerts might have been great events, but they didn’t work, and Kerry lost.

Utterly devoid of political subtext is Charlie Hunter’s jazz instrumental version of the song. It’s hard, if not impossible, to impart a social message to a song without lyrics but it doesn’t appear that Hunter is doing anything other than doing what jazz musicians have done forever — take a popular song and improvise around its basic structure, creating something wholly new. This piece is performed on Hunter’s specially designed and created 8 string guitar with “fanned frets” which allows Hunter, and anyone else who buys one, to play bass lines as well as guitar.

The Holmes Brothers, originally from Virginia, mix gospel, soul, country, folk, and rock into a compelling and award-winning brew. In addition, they are known for recording with other musicians from many genres, including Peter Gabriel, Willie Nelson, Joan Osborne, and Van Morrison. Not surprisingly, their take on the featured song is rooted in the gospel that brothers Sherman and Wendell Holmes grew up singing in their church choir, but with a bluesy soul that renders it a secular hymn for, yes, peace, love, and understanding. A similar approach, although with maybe a bit more of a country feel, was taken by Keb’ Mo’ in his cover, which seems strangely apolitical, despite its inclusion on an album of protest songs.

Lucy Kaplansky initially skipped college to move to New York to become a folk singer. Then she went back to school, ultimately getting a Ph.D and becoming a psychologist, all the while singing. However, despite success as a duo with Shawn Colvin and record company feelers, Kaplansky decided to focus on her therapy career, although she continued to do session work and the rare concert. But the inexorable pull of music led her to record an album, produced by Colvin, which was successful enough to convince her to return to music full time. Kaplansky’s second album, Flesh and Bone, included eight original songs, one traditional tune and three well-chosen covers — songs by Richard Thompson, Gram Parsons, and our featured song. (Some versions of the album also include a “hidden” Beatles cover.) Kaplansky, maybe somewhat ahead of the curve, turns the song into a boisterous bluegrass cover.

Costello covered the song to show his anger at world conflict. David Broza, an Israeli musician who has also lived in England, Spain, and the United States, recorded the song as a gesture of hope that tensions between Jews and Palestinians could be lessened. Broza, a longtime peace activist, recorded the album (and related documentary) East Jerusalem / West Jerusalem in an East Jerusalem studio, featuring both Israeli and Palestinian musicians, as well as from other countries. The album was produced by Steve Earle (no stranger to the song), and Broza covers Earle’s song “Jerusalem,” on the album. This version of “Peace, Love and Understanding” features the Jerusalem Youth Chorus, a group consisting of both Israeli and Palestinian teenagers, and the video is worth a watch. As Broza has stated: “[T]his song, when sung by an Israeli-Palestinian Youth choir in Jerusalem, gets a new meaning of how worthwhile it is to try and bridge differences. And what could be more symbolic and inspiring than young voices harmonizing together and overcoming their fears and skepticism?… I hope this rendition will resonate and bring a fresh approach to this conflict and all others.”

Find the Brinsley Schwarz original on iTunes and Amazon.