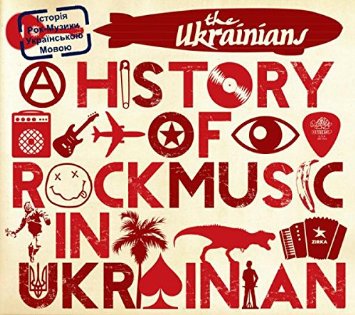 Originally a one-off offshoot of 80s/90s indie stalwarts the Wedding Present, the Ukrainians bizarrely continue to exist, plowing their singular farrow, long after their parent band have become a distant nostalgic tear in the eye. With a mission statement of mingling western rock with eastern folk, and never straying far from that, the band has a history of liberally including the odd quirky cover in their repertoire, notably of the Smiths and the Sex Pistols. Now, the five grizzled individuals in the current lineup have decided to devote an entire album to cover versions. This was a project capable of falling flat or becoming parody; however, I am delighted to inform that, both on record and (especially) live, such is their fervor and dedication to their craft that A History of Rock Music in Ukrainian is a delight.

By mixing snatches of Ukrainian folk melodies alongside a driving rhythm section, whistles, accordion, mandolins and fiddle weave counter-intuitive cacophonies of barely contained chaos. And the vocals! Oh, the vocals! Stentorian basso profundos, roaring out in unison and alone, evocative of crazed and vodka-fueled horsemen, galloping ever closer to your somehow now less than safe homestead. If you ever wondered what may be the connection between Nirvana, the Mamas and the Papas, and Kraftwerk, well, wonder no more: it’s Ukrainian. Other artists with their material transformed include Led Zeppelin, Iggy Pop, and R.E.M., with reprises of their Smiths and Sex Pistols songs. Hell, they even manage to pull off “Back in the USSR,” a slightly too obvious choice, but here bludgeoned successfully into submission. Glasnost this ain’t.

Album reviews on this site don’t traditionally include links to any of the actual songs, but I fear this may all sound too outré, too Leningrad Cowboys for many. So I really have to sneak in this clip, a promo for one of the standout tracks. I think you will agree a shot of vodka would go down very well after that, time of day regardless.

P.S. I was lucky enough to see the Ukrainians play recently (they tour only infrequently: catch them if you can), and afterwards I got to chatting with Len Liggins, vocalist, fiddle-player and all-round good egg; he happily endorsed my use of this clip.

A History of Rock Music in Ukrainian is available, just, at Amazon, but you may prefer to check out their website.

2 Responses to “Review: The Ukrainians, ‘A History of Rock Music in Ukrainian’”