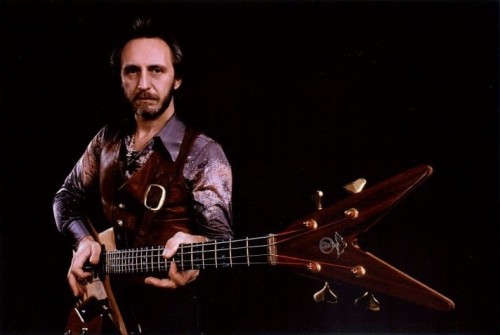 On June 27, 2002, John Entwistle died at the age of 57. Four days later, Roger Daltrey and Pete Townshend began a tour as the Who. The show began with Daltrey announcing, “Tonight we play for John Entwistle…. He was the true spirit of rock & roll, and he lives on in all the music we play.” It goes without saying that all the music they’ve played since hasn’t been the same as it would have been with ol’ Thunderfingers in front of his Marshall stack, stone still except for his amazing hands.

While Townshend’s songs were the lifeblood of the Who, Entwistle carved out a distinctive part in the band’s voice with his own writings. Where Townshend’s work could take itself very seriously, Entwistle’s was able to be both lighter and darker – lighter in that it showed a sense of humor, darker in how ghoulish that sense of humor could be. He leavened the band even as he bolstered it.

In his song “The Quiet One,” Entwistle wrote, “I ain’t quiet – everybody else is too loud.” His cover catalog is quiet in the same way – you’re more likely to hear a Townshend cover than an Entwistle one – but we did manage to track down some songs of his that can be counted among the best Who covers out there.

Raisin Rhyme – Boris the Spider (The Who cover)

Entwistle’s very first song was “Boris the Spider,” which introduced his macabre sense of humor to the world. Funnily enough, children loved the song, and the Who’s manager Kit Lambert made plans for Entwistle to do a solo kiddie album, assuming your kiddies were Pugsley and Wednesday Addams. Entwistle was all for it, but the project never came to fruition, leaving the songs written for it lucky to come out as deep cuts and B-sides (“Silas Stingy” and “Dr. Jekyll & Mr. Hyde,” to name two). Today, “Boris” remains a favorite for youngsters who like to get scared, but not too scared. This cover comes from the quality children entertainers Raisin Rhyme and their album Reach Up & Have Fun. Note that in this version, the spider doesn’t get killed.

Entwistle couldn’t pronounce his R’s. Naturally, the other members of the Who would sometimes have him introduce “The Kids Are Alright,” which he called “The Kids Is Alwhite.” When he recorded his song “Whiskey Man,” he sang “Whiskey man’s my fwend,” then double-tracked it with him singing “Whiskey man’s my flend,” in the hopes that the two together would make an R sound. This cover comes from Soundclouder Jordan Martin, who says, “I hope I’ve done it justice.” That he has.

Mandible – Cousin Kevin (The Who cover)

When Townshend was writing Tommy, he had trouble writing the “nasty songs” for the abusive Cousin Kevin and Uncle Ernie, due in part to his own childhood abuse, so he farmed them out to Entwistle (“Write something horrible,” he said), who had no qualms about addressing the darker side of human nature. About “Cousin Kevin,” Entwistle said, “Musically, I wanted the piece to sound both sinister and childish, so I came up with a kind of ‘Chopsticks’ theme on the piano to make it sound like a simple children’s song.” Mandible’s cover does a fine job of capturing the mischief turning to malevolence.

Motorpsycho – Heaven and Hell (The Who cover)

During the Tommy touring years, the Who frequently opened with “Heaven and Hell,” as a way to limber up for the heavy lifting of the opera yet to come. They never nailed a studio take, and as the first song of the night, their live performances, powerful as they were, often found the soundmen twiddling the knobs to get the balance just right, so it never sounded as good as, say, “Pinball Wizard” would later in the evening. But it was recognized as one of Entwistle’s great songs, and became a favorite of hard rock / heavy metal bands. This version by Norwegian power trio Motorpsycho appeared on their 1996 album Blissard.

The Montgomerys – My Wife (The Who cover)

“My Wife,” Entwistle’s Who’s Next showcase, became his other lasting in-concert spotlight moment, along with “Boris.” The tale of a man who’s more afraid of his spouse than of the police, “My Wife” has had a number of quality covers (don’t sleep on Juliana Hatfield‘s), but this very gentle version by a band called the Montgomerys caught our ear in a way none of the others did. This would be a hoot at a hootenanny.

Godfrey Townsend, who handled lead guitar and vocals for the John Entwistle Band, shares some memories of John here.

One Response to “In Memoriam: John Entwistle (The Who)”