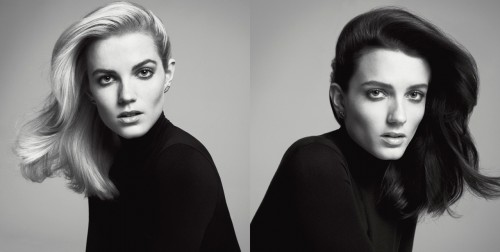 First and foremost, I will start off by admitting I had no clue this was originally Cher‘s song. Then again, on first hearing Nancy Sinatra in Kill Bill Vol.1, I should have expected no less from Quentin Tarantino than to feature yet another brilliant cover song to accompany his film (after all, he did do it in Reservoir Dogs, Pulp Fiction, and Jackie Brown).

“Miranda and I have always been quite wary of doing covers,” say Elektra Kilbey, nodding to her twin sister. “I think it might sound ridiculous but for us there are just gods and goddesses that you just don’t touch and you don’t do covers of. We just love the song and I hope we did it justice in some aspect.” (via Gigwise)

The siblings are indeed wise in taking caution – some songs are not meant to be touched, and in the rare case that they are, expectations are often hard to match. Say Lou Lou thus opts for the safer route.

The Kilbey sisters croon to the tune of Cher’s 1966 “Bang Bang (My Baby Shot Me Down)” à la Nancy Sinatra, delivering a careful cover that closely mimics its memorable predecessor. Brooding guitars blend with Say Lou Lou’s haunting harmony, ultimately resulting in an homage that would do a Tarantino film proud.

Watch the performance down below.