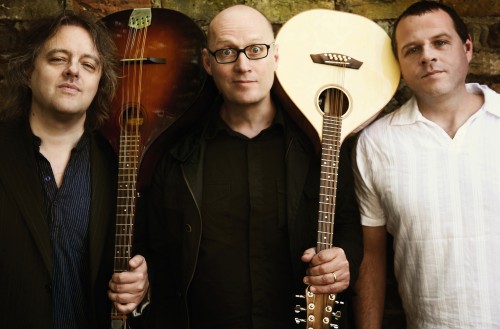 The way Adrian Edmondson tells it, he bought a mandolin after an inebriation-inducing lunch near Denmark Street in Soho, “a very dangerous place to be with a group of friends, drunk, if you have either cash, or a credit card about your person.” The next day, he picked it up and began playing the songs of his youth – by bands like the Clash, the Sex Pistols, the Ramones, and other bands that certainly informed his portrayal of Vyvyan Basterd in the beloved Britcom The Young Ones. What came out was something very special indeed – so much so that Edmondson went out to find like-minded folk musicians to play this music with him, and when he found Uilleann pipe player Troy Donockley, the Bad Shepherds were born.

The band, augmented by various fiddlers, bassists and percussionists, became a huge hit on the festival circuit. People may have come to the show expecting to laugh at the comedian playing punk songs like they’d never been played before, but they wound up smiling for different reasons altogether. “We call it joy,” Edmondson said in a 2013 interview. “Maximum joy is out motto… Comedy is combat, you have to batter people into laughing at you, but with music, you join together, the band and the audience make it work.”

The Bad Shepherds don’t need an audience to make it work, either – they’ve released three fine studio albums. Below are some samples…

Arguably the only cover of an American band on 2009’s Yan, Tyan, Tethera, Methera! (I’ll argue why in a moment), “Once in a Lifetime” has a gentler sense of exuberance than the Talking Heads original.

The Bad Shepherds – I Fought the Law (The Clash cover)

The Bad Shepherds – Anarchy in the UK (Sex Pistols cover)

2010’s By Hook or By Crook opens with a cover of the Sex Pistols’ “Anarchy in the UK,” but you can’t say it opens with a bang. Rather, the song sounds like it’s drifting across the moors, encountering its listeners rather than confronting them. Where the original assaults, the remake enchants.

2013’s Mud, Blood and Beer starts off with “Our House,” the Madness song that served as their US breakthrough and was featured on The Young Ones. But where that lip-sync appearance ended with a lot of kickin’ and a-gougin’, the Bad Shepherds is immersed in seas of tranquility and memory.

It wouldn’t be a worthy punk-cover band if it didn’t include a Ramones cover, would it? So it stands to reason that this medley makes the Bad Shepherds worthy thrice over. You’ll find covers of “Now I Wanna Sniff Some Glue,” “Gimme Gimme Shock Treatment,” and “Blitzkrieg Bop” brought together here.

Learn more about the Bad Shepherds on their website. Buy their music at iTunes and Amazon.

2 Responses to “Under the Radar: The Bad Shepherds”